Ma pleads for witnesses ‘to speak up’ 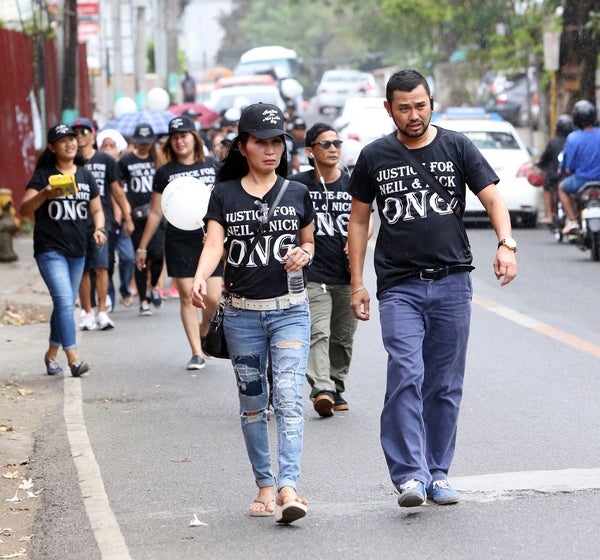 Thelma Ong, mother of murdered seamen brothers Neil and Nick and lawyer Albert Vasquez together with family, friends and relatives stage an indignation rally to call on authorities to serve them justice. CDN Photos/Lito Tecson

About 200 people consisting of the family and friends of slain seamen Neil Brian and Nick Benzen Ong held an indignation rally in Cebu City to dramatize their call for justice yesterday.

Thelma Ong, mother of the victims, said it had been nearly two months since she had received updates on the case from the police.

She also called on witnesses to come forward to help expedite the resolution of the case.

“I’m begging to all the witnesses to come forward. You have to speak up. We cannot allow these perpetrators to walk freely like nothing happened. It is the only way that Neil and Nick receive the justice that they deserve,” she said.
Neil Brian and Nick Benzen Ong, aged 28 and 25 years old respectively, were killed during a drinking spree in a bar in Barangay Punta Princesa, Cebu City, last Jan. 26.

“They were very close to one another. They almost shared the same friends,” said Thelma Ong, who worked as a nurse in a cruise ship and arrived in Cebu last Thursday to mark the 40th day of the deaths of her sons.

“You lost not only one but two children at the same time,” Thelma said, adding that she saw her sons for the last time in December last year. 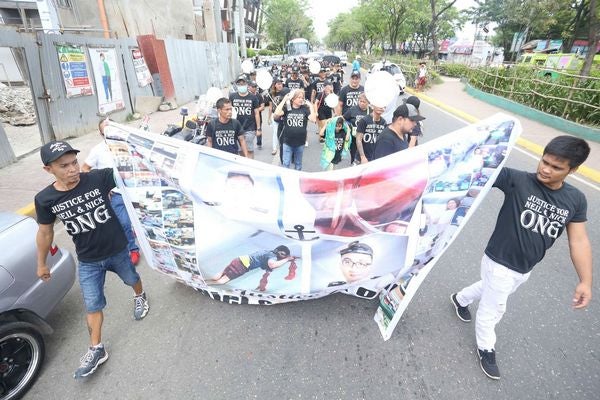 She said she plans to put up reward money for information leading to the arrest of the suspects.

They later headed to Sacred Heart Parish in D. Jakosalem St., Cebu City for a Mass.

“I do not know what crime or reason the police keeps insisting that they are still following leads. We hope they can solve this problem in the earliest possible time,” he said.

The Cebu City police’s Investigation and Detective Management Branch (IDMB) said it already secured the cartographic sketches of those believed to be responsible for the murders. /Correspondent

Read Next
AWOL cop from Bohol shot down

TAGS: ‘to speak up', for, Ma, ONG MURDERS, pleads, Witnesses