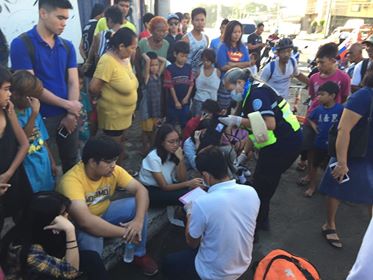 Rescuers attend to students and their guardians who were on board the school van hit by a military truck at around 6:30 a.m. along the junction of R. Cabahug St. and M. Logarta Ave. in Cebu City on Dec. 20, 2019. |CDND photo/Delta Dyrecka Letigio

CEBU CITY, Philippines — Ten students and guardians were on their way to a school Christmas party at a private school in Mandaue City when their school van was hit a military truck and toppled over.

The school van was allegedly hit at the rear end by the military truck, causing the van to flip on its side.

According to the initial investigation of the Mabolo police, both vehicles were moving fast. The military truck was moving along R. Cabahug Street while the school van was along M. Logarta Avenue when they crossed at the junction. 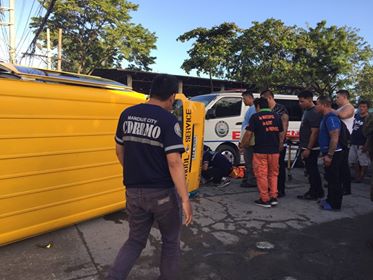 Traffic investigators inspect the school van that flipped on its side after it was hit by a military truck at around 6:30 a.m. along the junction of R. Cabahug St. and M. Logarta Ave. in Cebu City on Dec. 20, 2019. |CDND photo/Delta Dyrecka Letigio

Police Staff Sargeant Mark Lester Calib-og, the responding traffic police, Staff Sargeant Andres Rumbines, the driver of the military car, attempted to stop, but collided with the rear end of the van.

Rumbines, for his part, said the van was moving too fast and when he saw the vehicle, he immediately pulled to a stop.

“Nung nakita ko, agad ako nagbreak. Sila yung bumangga sa amin at nahila pa nila kamo. (When I saw the truck, I immediately stepped on the breaks. They were the ones who dragged us upon collision),” said Rumbines.

Second Lieutenant Agiel Aninon, the commander of the group, said they were deployed as security at the Basilica Minore del Santo Niño during the Misa de Gallo and were on their way back to Camp Lapulapu in Barangay Apas when the incident happened.

Susan Aurello, the owner of the van, said in an interview with CDN Digital that there were at least 10 passengers in the van with the driver. Most of the passengers were students.

Aurello, who  was sitting at the back of the van when the incident happened, insisted they got hit by the military truck as they crossed the junction.

Calib-og said they are waiting for confirmation on the status of the injured driver and students. /elb