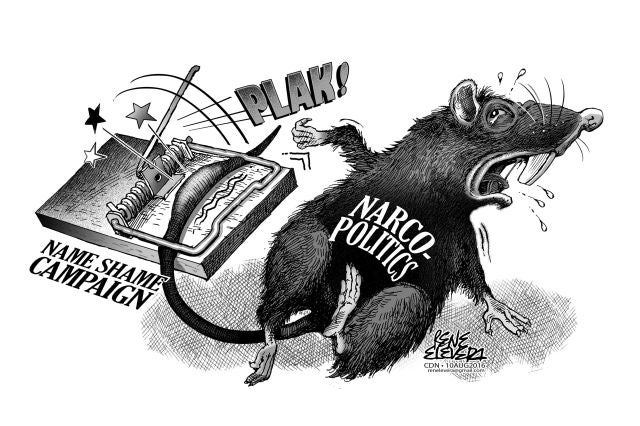 The police shootout with bodyguards of Albuera Mayor Rolando Espinosa at his home and his subsequent surrender to PNP Director General Ronald dela Rosa along with President Rodrigo Duterte’s confirmation of former Cebu City mayor Michael Rama in the list of suspected drug lord protectors / coddlers and the surrender of Franz Sabalones, brother of San Fernando Vice Mayor Fralz Sabalones, were the administration’s answer to critics who complained that the war against illegal drugs is unjustly balanced against the poor.

The drama that unfolded in the past week and last Sunday dawn merely drove up the ante in the war on drugs as well as public concern on how this will impact on the families of those incumbent and former public officials whose names have now been tarnished by the President’s high profile shame campaign.

The Espinosa saga caught in its web Daanbantayan Mayor Vicente Loot, who was supposedly a protector of Kerwin. Regardless of his claim to innocence, Loot won’t have supervisory control over his police chief and won’t be allowed to carry a firearm thanks to President Duterte’s order stripping him and other mayors suspected of having drug ties.

Such won’t be Rama’s case as the former Cebu City mayor’s political fortunes have taken yet another turn for the worse with Duterte’s declaration of him as an alleged drug protector.

It remains to be seen if Rama is allowed access to documents pertaining to his being tagged as suspected drug lord protector, but having been named publicly as such, the former mayor should be afforded every chance to prove his accusers wrong, who in this case remain unidentified (though Rama’s supporters suspect who he or they may be) and have the President doing the accusing for them.

That same right and opportunity should also be accorded Mayor Loot, though the Espinosa link may have further reinforced public distrust and suspicion about his alleged involvement in the illegal drug trade.

It’s hard to top these two developments, yet the surrender of Franz Sabalones may prove significant in breaking the illegal drug network in Cebu. But this came at a cost as Duterte’s declaration of Sabalones’s brother as a drug lord protector tarnished his reputation and by extension, his family.

Loot, Rama and Sabalones all have reputations and personal honor to repair and rebuild after being tagged as alleged drug lord protectors and coddlers, and if this were happening in another country, specifically the US, President Duterte would be accused of witch-hunting and he would be haled to Congress where an impeachment complaint will be filed against him.

But since he owns a super-majority in Congress and Duterte has long dared critics to impeach him, his war on illegal drugs which includes shaming suspects in public will continue as planned. And there is no stopping it at least for now.

Read Next
Funeral for an era