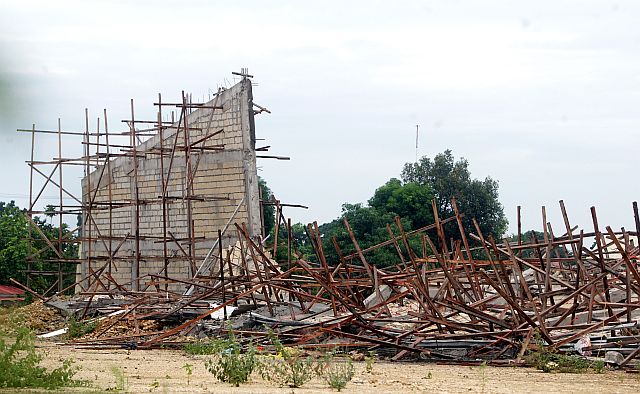 Representatives of the owner of the Citi Hardware warehouse project, where two workers died and seven others injured in a wall collapse accident last Friday, agreed to comply with all the requirements that the labor department ordered them to correct.

Engineer Leo Mabale, site engineer of the project, and Basilio Acebo Jr., foreman of the project, represented the owner of Toril LCY Trading Corp. during yesterday’s meeting with Director Exequiel Sarcauga of the Department of Labor and Employment Central Visayas (Dole-7).

Sarcauga met with the company officials in a conference at 2 p.m. on Monday following the issuance of a stoppage order on construction work of the warehouse project which was issued the previous day.

Mabale and Acebo assured Sarcauga that they would correct all deficiencies at the construction site and shoulder the burial and hospital expenses of the victims.

“That is one of our requirements for them. They have to extend assistance to the workers and their families,” Sarcauga told Cebu Daily News on Monday.

“They have quite a number of violations. They were non-compliant to almost all standards,” he added.

Sarcauga said the owner of the construction project did not hire a contractor but engaged the services of individual professionals such as a foreman and site engineer.

He also said the owner did not also provide personal protective equipment to its workers, did not have a construction safety and health program, and did not deploy a safety officer at the site.

There were also no structural analysis on scaffolds, no records, and no social benefits to workers, who used substandard construction materials.

Work on the project would be suspended until the contractor would comply with all the requirements, Sarcauga said.

DOLE also issued a work stoppage order against the contractor of a condominium project in Barangay Labangon, Cebu City in August when the retaining wall on-site fell on a 22-year-old construction worker.

The order was lifted two weeks ago after the project contractor complied with Dole’s requirements.

Sarcauga said that the main concern of Dole is the health and safety of the workers.

He said the stoppage order is a corrective measure to prevent the occurrence of similar incidents in the future.

Read Next
No ID, no entry rule at CSBT