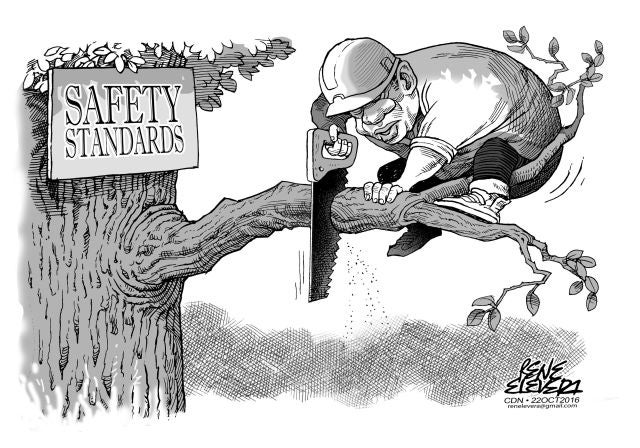 The deaths of three workers due to accidents in the northern Cebu town of Liloan and at a mall in Cebu City are just the latest in a long list of work-related deaths in Cebu that, while not that frequent, still highlighted the continuing disregard of contractors for workers’ safety and benefits, as well as the seeming tolerance or neglect of local governments in clamping down on these labor violations.

Workers Lazaro Capa Jr. and Elvin Cuba Bongo along with seven other workers apparently didn’t wear any safety gear—one worker admitted they only wore T-shirts, shorts and slippers—when they started work on a wall for a warehouse that eventually collapsed on them last Friday.

A few days later in the afternoon of October 17, Monday, delivery man Amistad Udto was loading cargo on one of the freight elevators of a Cebu City mall when the cables that held the elevator snapped, crushing him to death.

In both of these cases, the contractors failed to observe nationally mandated work safety procedures that would have protected not only the workers but, as shown in the elevator accident, the public as well.

The Department of Labor and Employment (Dole) has yet to identify the contractor for the warehouse project but we can only hope that the owner fully pay the workers their benefits as well as medical coverage if and when the project is allowed to proceed.

That there was no work safety supervisor on site to make sure that no accidents occurred was a telling indicator that the local and national government agencies tasked to oversee and ensure the safety of workers were sleeping on the job.

Last Monday afternoon’s accident in Elizabeth Mall could have also been prevented if the owner of the elevator, Gan Go Trading, conducted regular preventive maintenance checks.

Cebu City Councilor Dave Tumulak said his initial investigation showed that the firm did not secure a permit to operate since 2011.

Why they failed to do so only they can explain. But it might have been a small miracle that the elevator continued to hold up and didn’t collapse for five years prior to last Monday’s accident.

The usual explanation for either the Cebu City Office of the Building Official or the Dole office in Central Visayas why these accidents occur is that they don’t have enough personnel to conduct inspections on every structure being built or standing within their jurisdiction.

Which is unacceptable for the families of the victims who have no choice but to take their chances and face the very real possibility of being killed by a collapsing wall, an elevator that’s barely holding up with rusting cable wires, or any other hazard that could have been prevented if the foreperson, the contractor and the company had taken time, effort and willingly spent on measures that will make them fully comply with labor safety requirements.

Read Next
Lords of the bills: Return of the pork