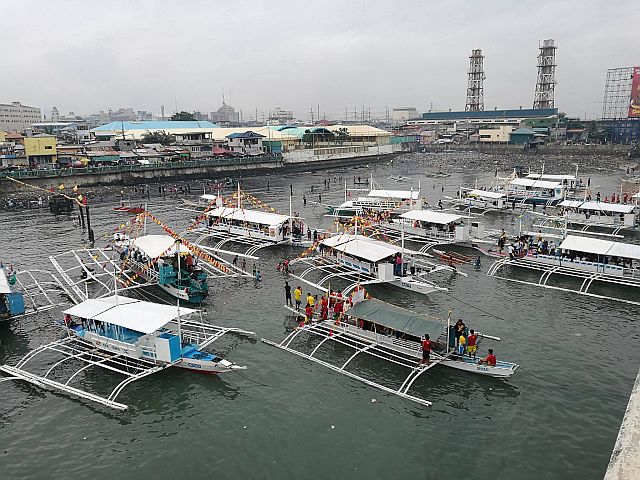 Ampil said that only 57 vessels, including motorized bancas, have earlier registered as participants for the fluvial parade (CDN PHOTO/CHRISTIAN MANINGO).

Despite cloudy skies and high turn out of unregistered vessels that joined the Señor Sto. Niño fluvial procession along the Mactan Channel early this morning, the activity for the Fiesta Señor or the Sinulog Festival was orderly and peaceful, the top officer of the Philippine Coast Guard (PCG) in Cebu said.

Commander Dionlett Ampil of PCG Cebu Station said he had expected that there would be unregistered vessels that would join the parade but not as much as the number that took part in this morning fluvial procession.

Ampil said that only 57 vessels, including motorized bancas, have earlier registered as participants for the fluvial parade. However, almost 300 vessels were seen participating the procession along Mactan Channel, which departed from the Ouano Wharf in Mandaue City hortly before 7 a.m. and reached Pier 1 in Cebu City at around 8 a.m.

On a regular day, crossing the Mactan Channel from Ouano Wharf to Cebu City’s port area would just take about 15 minutes.

“Overall, the activity was successful since the people coordinated (with the PCG and other Maritime and land-based authorities) and really followed the rules. Kahit nga yung panahon nakisama sa atin (Even the weather cooperated with us),” Ampil said.