Trump’s presidency and the future 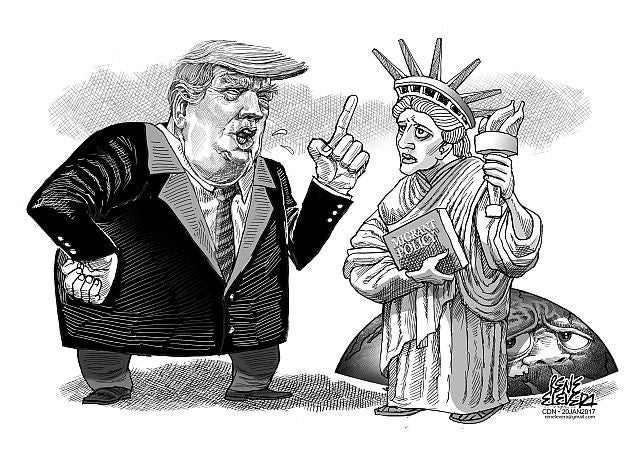 Barring any last minute earth shaking development, Americans will witness the oath taking of businessman Donald John Trump as their 45th president, the oldest and wealthiest ever elected to the White House and the most polarizing–if not in recent memory, then in US history.

While US and foreign analysts agreed that Trump was elected on the strength of widespread dissatisfaction by the unemployed young Caucasian voters of the Obama administration, they still found it surprising that Trump managed to win despite widespread opposition from various sectors, including immigrants who fear his administration’s plans to crack down on illegal aliens that may include their families.

From Hollywood to Washington, the erstwhile “Donald” had sparked fears of a major political upheaval in US domestic and foreign policies and that anxiety has reverberated across the Philippines, where US firms still constitute a large presence in the country’s business community.

There are assurances by American businessmen that they will continue to stay on especially the business process outsourcing companies whose revenues have helped employ thousands of Filipinos including Cebu-based employees.

But with Trump’s threat to impose tariffs on companies that outsource jobs overseas, it may not be long before these American businesses may be forced to relocate back to the US to provide employment to Americans.

The change in investment climate may not be immediate in contrast to President Rodrigo Duterte’s call and enforcement of his mantra that “change is coming” (and is ongoing in fact) but it may be coming and the government sensed this already as Duterte called on the Filipinos to be prepared to make sacrifices.

Trump’s ascendancy to the US presidency also comes as the Philippines assumes a leading role in the Association of Southeast Asian Nations (Asean) and with Mr. Duterte calling on the US, China, Russia and Europe not to meddle in Asean affairs, including his own relentless war against illegal drugs.

It remains to be seen how Trump, through his diplomats, will deal with the Duterte administration. But according to Mr. Duterte, the incoming US leader expressed admiration over his government’s handling of the drug problem and “even made him look good.”

Whether this goodwill will carry over in the next four years is anyone’s guess but this early Filipino business leaders including those in Cebu should know by now the necessity to look outside of the US market for other pastures such as Europe, Russia and China.

Whatever Trump’s ascension to the presidency holds, one can be sure that the rest of the world will act accordingly with the hope that it will lead to a more sustainable future in the years to come.

Read Next
On Trump and the drunken party mob