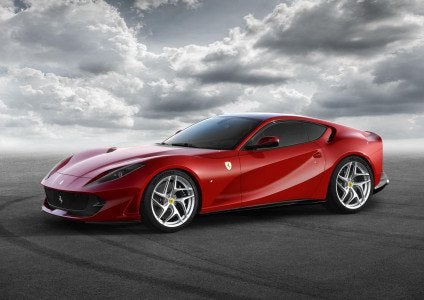 The days of the naturally aspirated engine are numbered, and soon turbocharging will be the only option open to car makers that want to continue offering keen drivers a keen serving of horsepower, but without falling foul of tightening fuel economy and emissions regulations.

With that in mind, the block that powers the latest full-size supercar from Ferrari is in effect, the perfect way to celebrate the non-turbo V12’s achievements over the past 80 years and to give it one hell of a send-off.

The latest iteration of Ferrari’s flagship powertrain has been expanded to 6.5 liters and for the first time ever, a 350-bar direct injection system has been added; something never before done on a high performance rather than a high efficiency engine. If Ferrari had stopped innovating there, it would have already done enough to seal the deal for most prospective supercar owners. After all, 789 horsepower, a 0-100 km/h time of 2.9 seconds and 718 newton meter of torque make this officially the world’s fastest, most powerful front-engined production car.

But this is just the beginning. The 812 Superfast gets electronic power steering for even greater turning precision whatever the speed. What’s more, because it’s a digital rather than analog system, the steering communicates and works in concert with the car’s other cutting edge stability systems.

Ferrari wants owners to drive this car, rather than put it into storage with the hopes of making a return on their investment. So it’s given it something called the Virtual Short Wheelbase system. It debuted on the F12 tdf limited edition in 2015 and will make the car feel and respond like a vehicle half its size at lower speeds. Think inner-city traffic and narrow side streets with tight turn-in angles. Ferraris with longitudinally mounted V12s tend to be both very long and rather wide.

Ferrari is also going even further into the realm of active aerodynamic technology for its latest model with flaps located in the nose that open and channel air under the car’s body and out through rear channels, to constantly optimize downforce and therefore its ability to stay glued to the road.
As this year marks Ferrari’s 70th anniversary, for a final flourish, the new car gets a celebratory shade of red Rosso Settanta paint. /motioncars.inquirer.net

Read Next
Cebu City aid: P10M or P1M for Surigao?