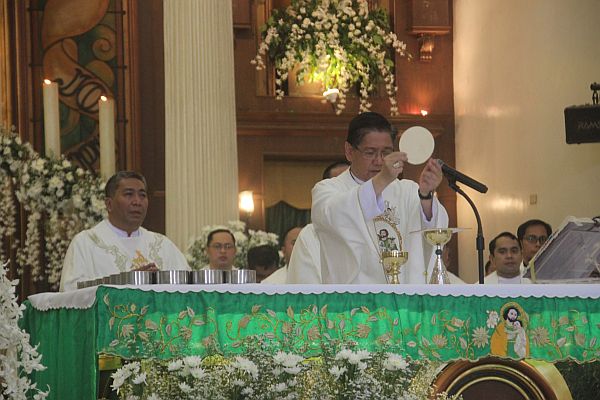 Strengthen and protect your families amid the culture of death and moral decay.

This was the appeal of Bishop Julito Cortes during the 10 a.m. Pontifical Mass in celebration of the feast of St. Joseph in Mandaue City on Monday.

Cortes, a former auxiliary bishop of Cebu and now the bishop of Dumaguete, lashed out at government policies that tend to promote a “culture of death.”

He particularly cited the government’s attempt to revive the death penalty as well as the spate of killings that has attended the administration’s crackdown on the narcotics trade.

As St. Joseph protected the Child Jesus from the wrath of King Herod who ordered the massacre of all the male children in and around Bethlehem, Cortes said the government and its people should shun measures that end human life.

“Let us oppose anything that doesn’t respect the value and dignity of human life. The government has served us for human development and progress. But at what cost? Is it all right to go against God’s laws just because of short-lived progress?” the bishop said.

Addressing devotees at the jampacked National Shrine of St. Joseph, the prelate urged the people to emulate the foster father of Jesus and husband of the Blessed Virgin Mary in upholding the sanctity of life and Christian values in the family.

“St. Joseph was an ordinary man like many of us. He too had his share of worries and was puzzled by certain things, but it was his faith in God that prevailed,” said Cortes in Cebuano during his homily.

“He looked for ways so that his family will survive in the right way. He earned a living as a carpenter — a lowly job but one with dignity,” he added.

Concelebrating with Cortes were Archbishop Emeritus of Cebu Ricardo Cardinal Vidal and about 30 priests led by Msgr. Daniel Sanico, vicar general of the Archdiocese of Cebu and team moderator of the National Shrine of St. Joseph (NSSJ).

Among those who attended the Pontifical Mass celebration were Mandaue City Mayor Luigi Quisumbing, Vice Mayor Carlo Fortuna, Rep. Jonas Cortes, and other government officials of the city. The renowned NSSJ Grand Choir, the champion in the first and only archdiocesan-wide choral competition years ago, provided the liturgical music.

The oldest image of St. Joseph in the Philippines is venerated at the main retablo of NSSJ’s altar which was decked with flowers.

Pondering upon the four dreams of St. Joseph as recorded in the Scriptures, Cortes encouraged every family to establish an intimate relationship with God through prayer.

“Prayer is man’s strength. We ask God for guidance to understand the mysteries of life, and He never fails to listen to us. God understands our predicaments. He Himself came down from heaven to share in our humanity, to listen and behold our miseries and pains. That is how sensitive God is to our experiences,” he said.

“God doesn’t want to give us anything less. All he wants is the best for you and me. He promised us that he has come to give us life — life to the full,” he added.

Cortes asked the people to dream with God, so that like St. Joseph, they will be able to discern God’s will for them.

“What is your dream for your family? Quality of life? Power? Fame? Or perhaps your life revolves around your business, politics, work, entertainment or just Facebook at the very least?” he said.

“Or does your world revolve around your family and your children? Remember that the future of humanity, as Pope Francis said, is in the family. The future of the world lies in the hands of the family, and changing the world starts at home,” he added.