IN CONJUNCTION with the Department of Tourism’s cultural and culinary event “Flavors of the Philippines,” key cities and provinces showcased their local cuisines to create awareness and promote the local food.

In Cebu, SM City Cebu has been supporting this endeavor. This year’s event dubbed “Sugbu” had Chef Raki Urbina of the Laguna Group of Companies in collaboration with events stylist and socialite Teresing Mendezona once again. The selection of the two brings to fore their expertise in Filipino and Spanish dishes.

Since the Philippines was a colony of Spain for almost 400 years, Filipino cuisine is heavily influenced by the Spanish rich and festive style.

The Northwing Atrium of the mall was dripping with “Puso” as backdrop during the culinary event. Also referred to as “hanging rice,” the once lowly “puso” or boiled rice wrapped in triangular casing made of woven coconut leaves, which are sold hanging in bunches in market vendors’ stores and carenderias, have risen to iconic status in Cebu.

The festive and colorful buffet presentation was reminiscent of “fiestas,” a culture and tradition we inherited from Spain.

This time, a Spanish touch proved to be very appealing—the Paella Puso. Puso traditionally is eaten with “sud-an” but the Paella Puso was a complete meal in itself. 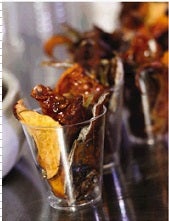 Fresh harvest from the sea dominated the appetizers.

The popular “Kinilaw” played around with chili, tuba or coconut wine, vinegar, lime or dayap, vinegar and gata or coconut cream to spice up raw fish, sea cucumber and shrimps.

Dried Pugapo that can pass for the imported bacalao or salted codfish was prepared ala Vizcaina or Basque style stew served on hard pan de sal.

From Taboan, the dried fish market in Cebu, danggit, tarorot, dilis were fried to a golden crisp served with camote in paper cones. Tarorot is an elongated squid caught off the waters of Bantayan Island.

The Calamari was strangely black, and Chef Raki explained that black squid ink was used to impart the black color in the batter before deep-frying.

Nangka seeds ala Fabada de Jamon was a surprise. I used to enjoy boiled nangka or langka seed when I was growing up.

It has a nice texture just like chestnuts. Nangka seeds substituted the large dried white beans for this hearty stew or Fabada, The Salad—Cantipla Harvest was an interesting medley of Pako (young fern), macopa, beansprout, lychee and buts of kasuy. Sitio Cantipla is a popular getaway destination for city dwellers high in the mountains cruising along the transcendental highway. 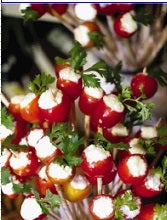 It is popular for its farm fresh produce. A bouquet of Cherry Tomato and Quiseo was eye-catching. I must have eaten a dozen!
The Mains or hearty entrees were a dishes familiar to us but with a twist here and there.

The Bistek Filipino was served Larsian style in barbecue sticks, Chicken Roast or Lechon Manok was marinated in San Miguel beer, and succulent Lechon was served on burger buns.

There was also tea-smoked Maya-Maya wrapped in banana leaves. A treat was the Pigeon Estofado—a stew with native coconut wine or tuba and aromatics.