Why cancel the BRT? 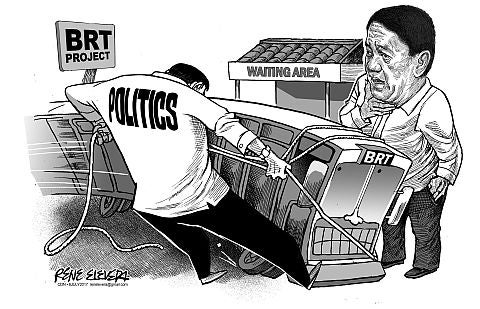 In calling for a review, not the cancellation of the Bus Rapid Transit (BRT) project, some 45 barangay officials of Cebu City said they were not consulted by the project management office.

The 45 barangay officials signed a manifesto that Presidential Assistant for the Visayas Michael Dino said he will use to persuade agencies like the Department of Transportation (DOTr) to scrap the project and replace it with a Light Railway Transit (LRT) project.

The basis for their call for reconsideration is a presentation by Engr. Rene Santiago, the president of a consulting firm that deals with infrastructure and natural resource and risk management, during last Saturday’s Metro Cebu Transport Development Stakeholders’ Forum.

At this point, can the Cebu City government afford to risk a second review of the BRT project after it underwent extensive review and dialogues with the stakeholders and agencies like the DOTr and the National Economic and Development Authority (Neda)?

More to the point, can the Cebu City government afford to scrap the BRT project in favor of the LRT whose implementation didn’t actually solve the traffic congestion problem and is continually being subsidized by the country’s taxpayers at a loss?

It’s hard not to suspect that the manifesto and the sudden turnaround of the barangay officials are motivated by partisan politics. Dino, who is supposed to look after the families in provinces like Samar who were displaced by Super Typhoon Yolanda, had taken quite an inordinate amount of interest in Cebu City.

It’s not that local officials are opposed to having an LRT project in Cebu City. The Cebu City government presented an alternate plan through which the LRT can exist and complement the BRT by serving to transport residents from Cebu’s towns to Metro Cebu and vice versa.

In recommending that the BRT be scrapped, Santiago claimed that the BRT buses cannot transport more passengers per hour and as quickly as the passenger jeepneys, a claim that has yet to be substantiated with studies and evidence which would entail additional millions of funding.

At any rate, it would take more than Santiago’s say-so to push back or even convince the national government to take a second review of the BRT project. If anything, Dino’s plan may amount to nothing more than political noise, which may be what this whole exercise is all about.

In calling for the cancellation of the BRT project, we have to ask whether Dino has public support for his initiative since barangay officials can easily be swayed with promises of funding and support from his patron.

In canceling the BRT project, it’s the national government and not Dino who risks incurring the ire and disbelief of foreign funding institutions who have previously given their stamp of approval to the project and will be left wondering why there is a last-minute turnaround in the first place.