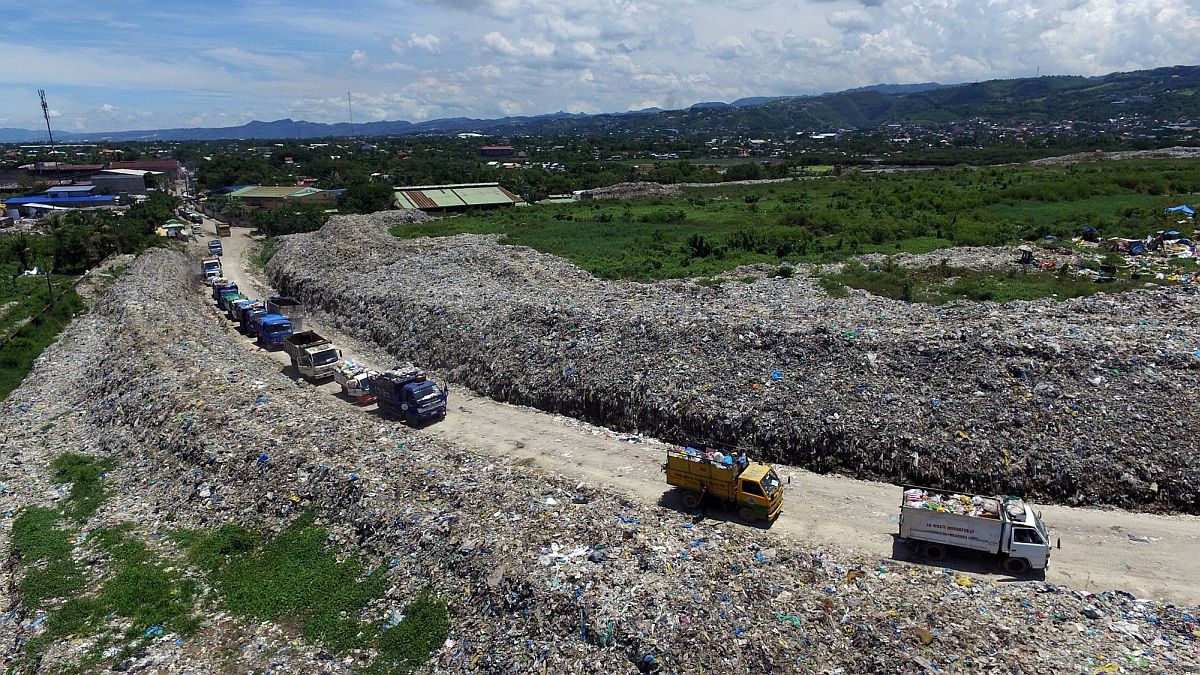 INAYAWAN LANDFILL. In this photo taken on July 26, 2016, garbage trucks queued to dump tons of garbage at the Inayawan landfill located in Barangay Inayawan, Cebu City. This area is now closed. The encircled section is now being used as a garbage transfer station, or an open dumpsite for trash collected in the city that meant for transfer to the government-approved landfill in Consolacion town in northern Cebu.
CDN FILE PHOTO

Do not be surprised to see activities inside the Inayawan landfill soon.

But instead of receiving wastes from Cebu City’s 80 barangays, initial “rehabilitation and remediation” works will be done inside the 16-year-old facility that was ordered permanently closed by the Court of Appeals (CA) in December last year.

The decision was not without an opposition, but since it got the nod of majority of the councilors allied with Bando Osmeña-Pundok Kauswagan (BO-PK), the Cebu City Council approved by an 8-7 vote the measure allocating P52.4 million for projects meant to rehabilitate the facility.

The appropriation measure was approved even as the Cebu City government is yet to get hold of a proper and final comprehensive rehabilitation and closure plan supposed to be conducted by a private consultant that is being hired by City Hall.

The move did not sit well with opposition councilors from the Barug Team Rama bloc who criticized the move as impractical.

The objection was anchored on the lack of clear pronouncement from Mayor Tomas Osmeña and the majority councilors on what they intend to do with a “rehabilitated” landfill and yet already spending millions of pesos on it.

“What is our direction (for the landfill)? As of now, there is still no definite direction, therefore, for us, we cannot start be spending for the Inayawan landfill as if we already have that closure plan,” said Councilor Jose Daluz III.

There are a total of six projects that were approved by the City Council to be charged to the city’s Local Development Fund (LDF) and the capital outlay for the solid waste management account of the city.

During the City Council’s session last week, opposition councilors objected to the proposal to construct a six-meter perimeter fence and to spend millions just to clear the service area, or what used to be a vacant space that has now been covered by trash.

But the dominant BO-PK won with an 8-7 vote.

Councilor Raymond Alvin Garcia, of Barug Team Rama, was absent while Councilor Dave Tumulak was the presiding officer since he was acting vice mayor in the absence of Vice Mayor Edgardo Labella who was abroad on a personal trip.

Wait for the plan

The minority bloc stressed that while they were not against rehabilitating the Inayawan landfill, it would have been prudent to wait for the final closure plan in order to align all projects to what will be listed under the plan.

“All other expenses (related to landfill rehabilitation) for now should be put on hold until we could get that plan so that we will not waste the city’s money,” argued Daluz.

Garganera, who filed the petition for a Writ of Kalikasan against the city government last year that resulted to a court order closing the landfill, protested that spending P35 million for a perimeter fence would be “too expensive” and looked like it would be meant to permanent.

Thus, he asked, why would the city build a new perimeter fence when the area would no longer be used to hold trash.

Assistant City Engineer Nilo Igot has earlier said that the perimeter fence will be made of hollow blocks and will be six meters high.

Gabuya also explained that the construction of a perimeter fence was meant to address one of the violations cited by the Environmental Management Bureau (EMB) of the Department of Environment and Natural Resources (DENR) 7 when it inspected the landfill last year.

Hence, constructing the perimeter fence is just in compliance to the notice of violation. At the same time, it will also be “part and parcel” of the final closure plan, said Gabuya.

“Yes, fencing is required by the EMB but that is just to confine the garbage so that scavengers cannot go inside. It’s for safety. But instead of spending P2 million for fencing, we are spending P35 million. That is permanent in nature,” Garganera noted.

“We are hiring experts to make this (closure plan) because we all agree that we are not experts. But it seems like they already have experts since they already came up with these plans,” he added.

Rama likewise clarified that while they were not opposed to rehabilitating the landfill, the money should not be spent on building a perimeter fence but to implement projects such as removing the leachate from the landfill, which, he said, is more important in order to avoid combustion and to prevent toxic wastes from seeping into the ground or ending into the sea or other bodies of water.

Rama said the Council had an executive session last month and they in the opposition had thought that the spending would come after the rehabilitation plan has been completed.

“I thought we had a meeting of the minds that we will just wait for the plan. That is being practical. We are not being unreasonable. We are being sound in our stand,” he said.

The contract was for P2.5 million, but all three bidding were declared a failure since no bidder could qualify for the stringent requirements under their terms of reference (TOR), she said. One bidder won in one of the bidding sessions but the winning bidder later backed out, Cabrera said.

Cabrera said that based on the TOR, the service provider will provide the city with data on the total number of waste deposited in the landfill,

characterization of the waste, leachate generation, quality of surface and groundwater, gas emissions, air quality and analysis, among others.

The bidding failure prompted the Bids and Awards Committee (BAC) to proceed with a negotiated procurement to identify a service provider to do the study and closure plan.

Cabrera said they have already identified a contractor named Full Advantage Phils. Inc. She added that the service provider is still working on some requirements by the BAC before they can formally start with the studies and formulation of the closure plan.

Full Advantage described itself on its website as a “business partner and solutions provider in the field of sustainable energy and environment.” The company said it is also a“ regional project developer and consulting company whose mission “is to help our partners and clients harness untapped resources, creative processes, and appropriate technological solutions in generating cleaner, more affordable energy, conserving it and contributing to a greener, more sustainable environment.”

Its three main business activities include advisory and consulting; business or project development and climate change activities. One of their seven sub-sectors is on biogas production and energy recovery from wastewater and landfill.

Aside from the perimeter fence construction, the minority councilors also questioned the P10-million budget to open up a three-hectare landfill service area.

Gabuya explained they needed heavy equipment to open a service area. Under the proposal, P7.2 million of the P10 million budget would go to the rental of one bulldozer for 960 hours at a rate of P7,600 per hour.; and P2.7 million to rent a backhoe at a cost of P1,600 per hour for 1,690 hours.

The majority councilors did not explain why they needed to reopen a “service area” inside an already closed dumpsite.

The P52.4-million needed budget for the rehabilitation works for the landfill is on top of the millions of pesos now being spent by the city in the hiring of a private hauler to haul its garbage from a private transfer station to a private landfill in Consolacion town.

The city will be spending close to P300 million in garbage hauling fees for this year including the current P124 million contract for the month of September until December.

The amount is around twice as much as the city’s spending for garbage disposal under the previous administration, which was between P120 million to P160 million a year.

Read Next
Amid Duterte’s new order, Espino to CHR: Coordination is key