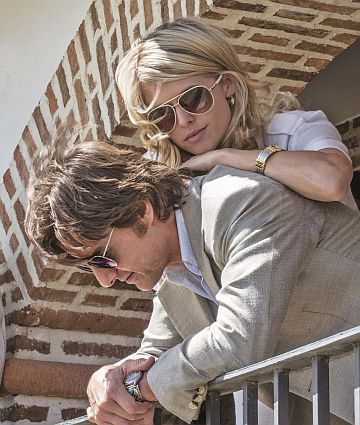 Well, this writer certainly does a lot of that—as well as watching endless movie trailers and spending countless hours reading and researching about each film.

Which brings us to this week’s offering of “American Made,” the latest film by the ageless one, Thomas Cruise Mapother IV, known professionally as Tom Cruise.

“American Made” is a mildly interesting film about Barry Seal, a commercial airline pilot who is seduced by the Central Intelligence Agency (CIA) into becoming president of a small commercial jet aircraft service which covertly takes photographs and conducts surveillance on Communist activities in Central and South America, then runs guns, primarily AK-47s for the local rebels.

A nice premise indeed and based on actual events. Cruise should be a natural. No, he is not! I was extremely generous to Mr. Cruise in his recent outing of “The Mummy” from earlier this summer.

It was a flawed outing (at its best) which at its end, had Tom Cruise becoming one of the living dead. But I’m taking the gloves off now, Mr. Cruise. No more Mr. Nice Reviewer as “American Made” is total bunkum.

Why? Nearly every single scene in this film—just like with “The Mummy”—stars, you guessed right. Tom Cruise. I, for one, am getting sick of seeing his perfect, white capped teeth and overacting as if he were making a high school drama.

Not only that, there has been no buzz about “American Made”—hardly any movie trailers released nor advance hype, which in the four years as a film critic, tells me  that Mr. Cruise and his production team have no faith in their final film product.

In “American Made,” we have Tom Cruise as an airline pilot, landing in Bakersfield, California, seemingly bored with the six figure income he’s raking in from the now defunct TWA-Trans World Airlines. Then, in almost the next scene, we have Tom Cruise (as Barry Seal), being hired by the CIA to run guns down to South America—then Tom Cruise (as Barry Seal) seduced to run cocaine by the (now dead) Pablo Escobar and sucking up more money than Fort Knox.

By time the second hour began, I was throwing my popcorn at the screen whenever Tom Cruise showed up—which was ALWAYS. The reason the “Mission: Impossible” films work is that Tom Cruise is—thankfully—not in every single scene and is surrounded by a very talented cast of character actors. Not so in “American Made.”

One of Cruise’s best buddies, Doug Liman, the director of “Mr. and Mrs. Smith” and had to share screen time between Brad Pitt and Angelina Jolie. Here, Liman, working from a script by little known screenwriter Gary Spinelli (who doubles as the Executive Producer of “American Made”) tries to create some type of synergy between Seal and his CIA operative Monty Schafer (Domhnall Gleeson) which falls completely flat.

Likewise is the husband/wife “chemistry” (or lack thereof) between Barry and his wife Lucy (Sarah Wright) who, although very attractive, is clearly one of the dumbest characters ever written for the silver screen.

Standing in their kitchen, she berates her husband for not supplying her with life’s creature comforts like a washing machine, a refrigerator or stove and if she doesn’t get what she wants, she will take their kids, leave him and go back her job at Kentucky Fried Chicken. That is when I would have opened the front door and escorted her out.

Look, if I was running drugs into South America for the CIA and then cocaine back into America for the vilest criminal the modern world has ever known, my wife, Cris Evert, would go crazy on me.

Instead, Seal’s wife thinks nothing of it when her husband reaches into a leather bag and yanks out stacks of hundred dollar bills—finally admitting to his wife his dual sided patriotic/criminal business activities. Lucy’s reply? She just stands there and asks:

“Is it legal”? Yep … dumb as a rock. In one of the more memorable scenes, Seal, flying solo in a small, twin engine aircraft, is tracked down by the US Customs and Border Patrol and ordered to land at any airport in South Florida.

Seal does just that, crash landing his plane onto a residential street.

Peeling himself out of the cockpit and covered in fine cocaine powder, Seal grabs a bag of cash, pays off one of the local kids with stacks of hundred dollar bills, grabs his bicycle and starts pedaling away. Ugh. Forget this movie. Instead find a copy of “Narco” a current multi-episode series running on pay TV.

The first two seasons about Pablo Escobar are riveting, as well as the true to life portrayal of Barry Seal. In “Narco” we see the true intensions of Mr. Seal.

No, not the sappy, happy go lucky Tom Cruise version, but the “real” Barry Seal, who was a malicious criminal who had no problem flying cocaine into America and shoving death into the veins of thousands of his fellow countrymen.

Now … that is the movie Mr. Liman should have made … and worthy of the reputation of Thomas Cruise Mapother IV. Sorry, Tom Cruise that is.
Questions, comments or travel suggestions, write me at [email protected]