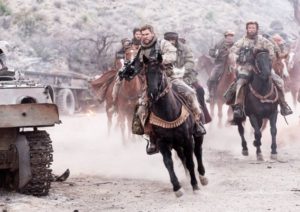 I have a question for you.

I mean this in all sincerity.

How do you think you would feel if next Tuesday morning at 9 a.m., 12 terrorists high jacked two Boeing jet aircraft from Mactan-Cebu International Airport and crashed one into the heart of the Makati Central Business District and the other into the Philippine Bank of Communications Tower in Manila?

This heinous act would not only take the lives of everyone on board these aircraft but thousands of innocents working in these skyscrapers and on the grounds below.

The thought is beyond comprehension.

Yet on September 11, 2001, the entire world changed in a flash of time, when jumbo passenger jets flew directly into the Twin Towers in New York City. This one act burned in the hearts of not only every American but every freedom loving soul around the world.

We will never forget.

Now we have “12 Strong,” a docu-drama (based on real events) with a strong cast, featuring Chris Hemsworth (“Thor”), Michael Shannon (“Man of Steel”) and Michael Peña (“Ant Man”) which addresses the “knee jerk” reaction of the Central Intelligence Agency and a vengeful nation in the immediate aftermath of 9/11.

After the rubble cleared in New York City, the Pentagon and a field in Stonycreek Township near Shanksville, Pennsylvania, the CIA immediately placed its “Task Force Dagger” program into action which included not only the fighting members of the famed “Green Berets” but its own paramilitary officers into Afghanistan.

There, with warlord general Abdul Rashid Dostrum (Navid Negahban) of the Northern Alliance, the Americas soared into battle against local Taliban forces.

And of course we know from history that the Taliban had given safe harbor to Osama bin Laden, the one-time American armed “freedom fighter” who, along with his Afghanistan allies, pursued the Russians out of their nation a decade earlier.

Filmed on location in New Mexico (doubling for the mountainous regions of Afghanistan), “12 Strong” has great casting and is uber-American
patriotic. Sorry no red, white and blue flags are waved here as they would probably have been used as target practice by the Taliban.

“12 Strong” is tightly directed by Nicolai Fuglsig, who got this director’s nod after only one small, low budget sci-fi outing (“Exfil”). Propping him up is a strong writing team, including Ted Tally (“Silence of the Lambs”) and Peter Craig (“The Town”) as well as Jerry Bruckheimer as the lead producer.
What could go wrong?

Well for starters, you have the cruddy “American accent” by Australian-born and bred Hemsworth who sounds like he is speaking through a tin can on one end, and through a thread, we hear him on the other. Then there are the “over the top”

performances by the rest of the cast, which on paper is really great (like character actor William Fichtner) but are so “gung ho” and so pro-USA, USA, USA that this American expat was choking on his popcorn.

Yes, I know the events of September 11, 2001 were horrific. Yes, I will admit at the time, this writer wanted to strap on his own six-shooters and go into the deserts of Afghanistan and go “get me some Taliban” … and these 12, heavily armed American gunslingers pretty much shoot everything in sight.

Certainly they are outnumbered (12 against 50,000) but the sad fact of life is that no one, and I do mean no one, in the world kills people more ruthlessly and with more efficiency (with less casualties) than the American Armed Forces.

It’s just the way it is and the Taliban didn’t stand a chance.

In “12 Strong” when the bang bang action begins, Hemsworth and his American compatriots are truly ruthless. Call it from better weaponry or a better training, when these “dirty dozen” saddle up on horseback and head up into the New Mexico (sorry Afghanistan) mountain highlands, you know the body count is going to be extensive.

No one back in the States every heard of the exploits of Task Force Dagger and probably for good reason. Like Jimmy Doolittle and his fighting band of 16, B-25 bombers that took to the skies over Tokyo after the bombing of Pearl Harbor on December 7, 1941, it was only a symbolic gesture against a
massively superior force.

Doolittle’s April 18, 1942 bombing of downtown Tokyo might (in the light of history) be considered more of a PR stunt for the people back home but in “12 Strong,” Doolittle’s fighting prowess is instantly inspiring and duplicated here in “12 Strong” but with better guns and larger body count against their presumed enemy.

“12 Strong” is a certainly a worthwhile attempt by a rookie director at re-creating the aftermath of that terrible September morning.