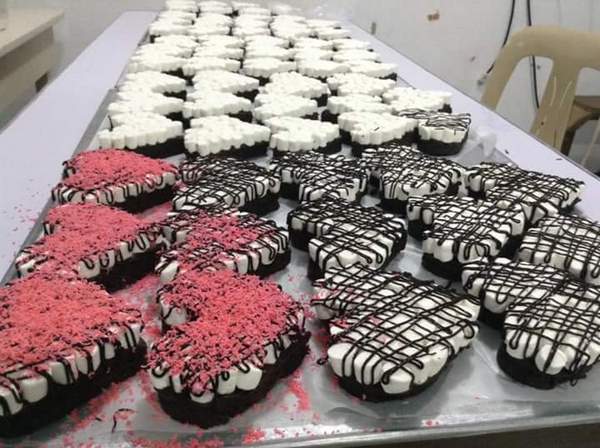 INSTEAD of looking into the anatomy of the human body, Registered Nurse Jay Kent Galay preferred to find the best anatomy for his brownies.

His latest masterpiece is a three-centimeter thick heart-shaped brownie in deep chocolate covered with mallows, chocolate raspberry shavings and bittersweet granache – a masterpiece he made last Feb. 14, Valentine’s Day.

Galay, 27, gave up his job as a nurse in a government hospital to establish Fullbring Desserts in 2013. He started with baking brownies for different celebrations.

“Back in 2013, it was all for a hobby. I used to just wait for orders to come, bake and then deliver,” said Galay.
Galay said that he only started pushing for sales in 2016, upon reuniting with his high school friend, Eric Magto.

Magto, an Information Technology graduate, takes charge of the marketing collateral of the business while Galay focuses on the recipes.

“That was the time that we started marketing our products to schools and through social media since we don’t have a physical store yet,” Galay said.

Although Galay studied nursing in college, he said that it had always been his goal to put up a business for himself.

“Since high school, I really wanted to have my own business, but I did not have a definite idea where to start or what industry to enter,” said Galay.

“It was in 2012 when my grandmother visited us here (in Cebu) and they were baking pastries that I got the idea and tried baking from their recipes,” he said.

Galay’s recipe in FullBring are “proudly inspired from a family’s tradition of recipes and procedures,” he said.

“My personal goal in baking is to give my customers the best quality of products at a price they can afford. Fullbring wants to bring the taste of premium pastries even to the low income sector,” said Galay.

A FullBring regular brownie comes at P10 apiece or P245 in a 24-piece box.

Aside from special occasion brownies, FullBring also takes pride of their black ambo, a 2-layer gelatin cake made of cream and chocolate.

Aside from orders for special occasions, FullBring Desserts are also offered in consignment for school cafeterias.

“We also have retailers, like housewives and working students who want to have extra income,” said Galay.

According to Galay, they also started supplying for local pastry shops to Carcar City and Samboan town, 155 kilometers south of Cebu.

Christmas and Valentine’s Day, according to Galay, are their peak seasons when everyone has a sweet tooth, and all words are worth saying through a slice of cake.

Lapu-Lapu City seniors told to get vaxxed vs COVID-19