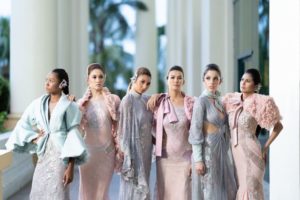 Tonight — his medium will be the message.

First things first: Philipp Tampus is revelatory in his biggest show ever.

Over 60 pieces from his own atelier are already chronicles of what it all felt like to be 60,000 miles away from homeland and then now back to where it all started.

The fashion designer radiates the grace, and he is bound to return the favor.

“Being a designer is not just making and designing cloths. We play a role in every client’s life by making them happy and look good; we contribute to the community with this cause, sharing our ideas and inspiring people. It’s not just making a name or acquiring fame,” he says.

True enough, on the night of Sept. 29, he will send down models in three stage transitions at the first charity fashion ball “Pink Exodus” at the Pacific Grand Ballroom of the Waterfront Cebu City Hotel and Casino. Along with Oro China and ClothesforLife, it will benefit breast cancer research and breast cancer survivors of ICanServe Foundation. 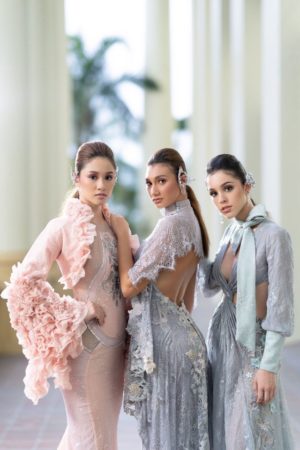 He has divided the entire show in three segments that tell a story of his creative journey in the Middle East and now back to his hometown, Cebu.

It is either viewed with a particular color transcendence (pastel to midnight to jet black) or a curation of wardrobe functions (evening gowns, tea length skirts, solid tailoring).

But history repeats itself: the series is as an archive of the various aesthetics he has had in a career that has spanned for 30 years.

The silhouettes celebrate the woman: cuts that are close to the skin interpreted in romantic renditions.

“A very Philip Tampus signature is the emphasis on the woman’s curves and figure, volume-ish yet light and wearable,” he says. “I love combining laces to come up with another lace. It’s very classic and feminine.”