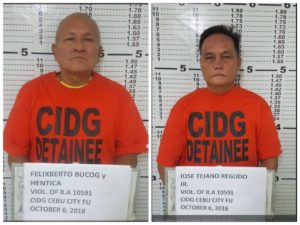 Two tanods of Barangay Calamba in Cebu City were arrested after they were caught with two .38 caliber revolvers on Sunday (Oct. 7).

Felix Bucog, 67, and Jose Regudo, 62, were caught at 7 a.m. in Barangay Calamba with the loaded handguns in their possession, police said.

Police officers from the Criminal Investigation Detection Group Cebu (CIDG-Cebu) and the City Force Mobile Group responded to a call from a concerned citizen of armed men in the area and arrested the suspects.

Both suspects were detained at the CIDG detention cells.