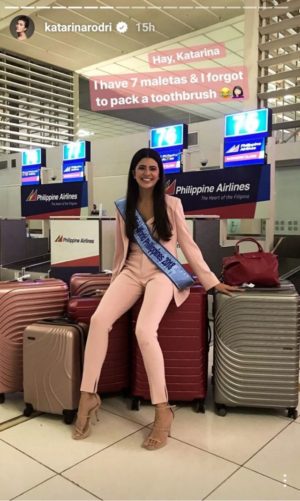 NOW is the turn of Miss World Philippines 2018 Katarina Rodriguez to conquer the world.

The Miss World Philippines organization confirmed in an Instagram post that Rodriguez left the country yesterday for Miss World 2018 in Sanya, China.

“Off she goes! Miss World Philippines @katarinarodri checks-in for her flight to Sanya, China via Guangzhou to clinch the country’s second blue crown. We are all behind you Katarina,” the post reads.

Rodriguez is the second Miss World Philippines 2018 winner to compete in an international stage after Alyssa Muhlach Alvarez who joined Reina Hispanoamericana 2018 last week in Bolivia.

“Good luck @katarinarodri. You’ve got this,” she said.

Through a series of Instagram stories, Rodriguez updated her fans and followers during her departure.

Some of the photos she shared showed her seven pieces of luggage.

Another photo was of her arrival in Guangzhou and thanking an airline staff for carrying her luggage.

“Thank you to Bonnie here at the airport in Guangzhou for being so kind and helping me,” she captioned the photo.

In 2017, she joined the Miss Intercontinental pageant held in Egypt where she finished first runner-up.