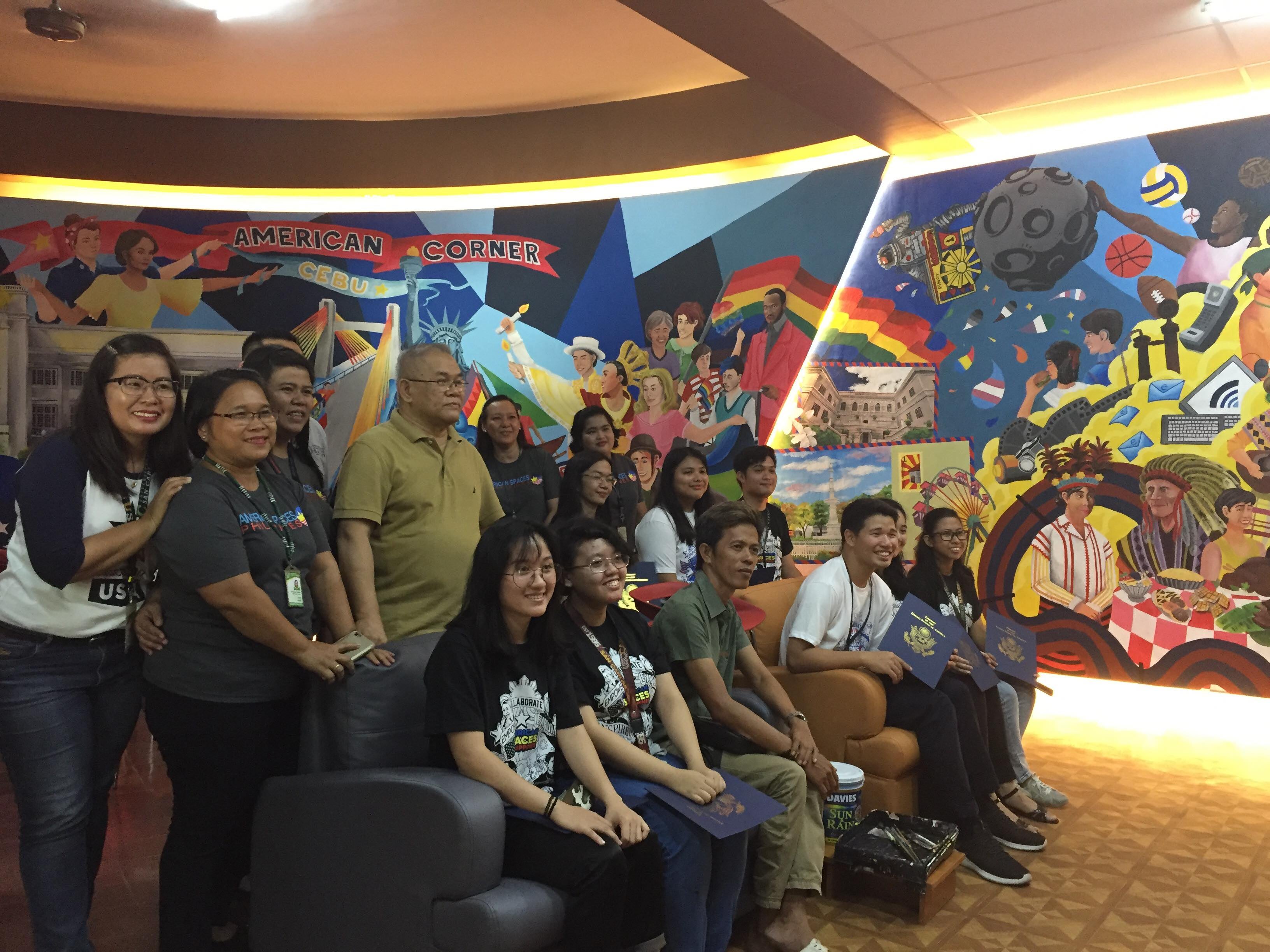 Student volunteers are joined by Fr. Dionisio Miranda, president of the University of San Carlos, for the unveiling of art mural project inside American Corner Cebu on July 10. CDND PHOTO / Gresheen Gift Libby

The mural was unveiled on July 10 in a ceremony attended by students, professors, art advocates and even, Father Dionisio Miranda, president of USC.

The art mural, which was funded by the US Embassy in the Philippines, was painted by 24 USC students and highlights various Philippine and Cebuano attractions as well as American features.

The art mural presents cultural and heritage attractions as well as practices in Cebu.

These include the Cebu Provincial Capitol, Marcelo Fernan Bridge, Magellan’s cross, and even the famous Sinulog festival.

“I am very ecstatic, in a way, because I believe that friendships or relationships, even political between countries can be levelled out when it comes to art. (With art), you do not have to take sides,” she shares.

Caro says she wants the students to know that their artwork serves a social purpose.

“I like the fact that students are given a chance to express their creative art. It’s something that they should do often to harness their skills and of course to relate it into practical issues such as cultural appreciation between countries,” adds Caro.

The librarian speaks highly of the students, whom she described as” very dedicated” in completing the mural.

Caro said the mural was supposed to be part of a course.

However, the students encountered issues on academic requirements.

Instead of dropping the project, Caro says the students volunteered to finish the mural and“very diligently” worked eight hours a day.

It took a day for student Dalene Quinn Vallecer to come up with the concept of the art mural.

She drew the concept using pencil and paper.

“It was all in my head, I could picture it. It took me a day to think about this but when I actually drew the entire thing manually, it took me a week,” she says.

Vallecer says she wanted to represent the LGBTQIA community and emphasize women empowerment through the mural.

She did this by including the rainbow flag at the middle of the mural.

The mural also came with the colors for bisexuality, pansexuality, and others.

A portrait of feminist icon “Rosie the Riveter” took the spotlight.

“We couldn’t put that many religious representations. That was hard because religion is a big part of Filipino culture and there were also lots of religious elements from America so I tried to incorporate the Magellan’s cross and the Sinulog festival, ” she explains.

But not all of them are art students.

Vallecer said the group was a good mix of marketing and engineering students, who share a mutual love and interest for art.

Apart from Cebu, the US Embassy will unveil murals in 14 other American Corners in Luzon, Visayas, and Mindanao.

In the Visayas, murals will also be launched at the Central Philippine University in Iloilo, Silliman University in Dumaguete, and University of St. La Salle in Bacolod.