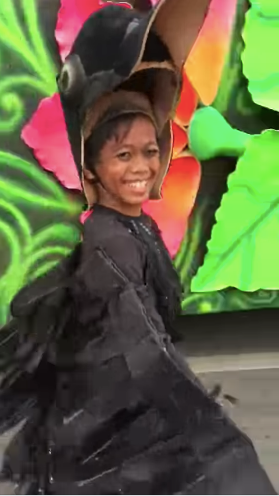 CEBU CITY, Philippines—Over the weekend, August 24 to 25, the streets of Cebu were filled with gigantic props, colorful costumes, and beautiful queens in celebration of the Pasigarbo sa Sugbo.

Participants from different towns all over  Cebu province joined in the festivities and shared their respective festival through street and ritual dancing.

It was a whole day of fun!

While members of other contingents were waiting for their turn to perform on stage, a boy wearing the costume of a blackbird entertained people on the streets.

His antics were appreciated by the people, especially those who were stuck in traffic.

The boy’s performance was recorded by one of their members, Ericailah Gerasmio.

“[Our team] was assigned to do live coverage for the Pasigarbo sa Sugbo street dancing competition.  I was tasked to take pictures and videos of the said event,” says Gerasmio.

The high energy of the boy dancing in the middle of the street caught their attention.

The boy’s name is Ivan. He is 12 years old and hails from Alcoy town, about 101 kilometers from Cebu City.

He was wearing a Siloy costume.

Siloy or Black Shama is a songbird that is endemic to Cebu. Most of its population is found at the Nug-as Forest in Alcoy. Being endemic to Cebu, the siloy cannot be found anywhere else in the world.

Gerasimo asked the boy why he was still very active after the entire day of dancing.

The boy replied that it was his first time to join a festival like Pasigarbo sa Sugbo.

The video showed that even with the heat and despite the humid costume, Iva was excited to participate in the festivities.

“It was fun because people were cheering for the young siloy of Alcoy. He gave joy to the audience and I think that was one of the highlights of the event,” says Gerasmio.

Watch the video of the lively siloy from Alcoy here: