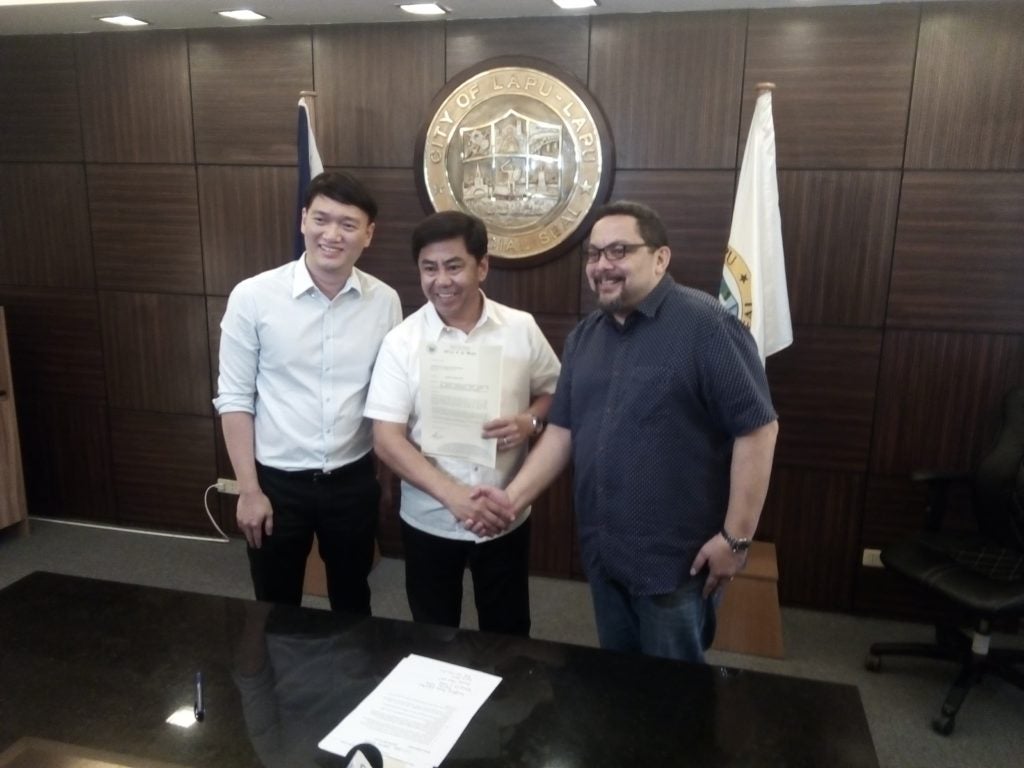 Oliver Tan, CS Water chairman, (from left) Lapu-Lapu City Mayor Junard Chan and Jose Antonio Soler,  CS Water president and CEO, during the signing of the Memorandum of Agreement with the city government on the desalination project.

LAPU-LAPU CITY, Philippines — Lapu-Lapu City Mayor Junard Chan has committed to supply potable water to the Metropolitan Cebu Water District (MCWD) once a private partner for water desalination will complete the project in a year and a half.

Chan said that he believed that neighboring cities and municipalites could be a big help to MCWD to address the lack of supply of water.

(Let’s help MCWD for them to serve their consumers and set aside political differences such as what happened with MCWD Board and the Mayor of Cebu City).

Chan said that with the current status of MCWD’s water supply problem, he was thinking of how the city could help address the supply of water which would also affect his constituents.

He said he was grateful that there was a water desalination company that offered the city government a partnership to supply water to MCWD.

The firm first approached the city early this year through former Mayor Paz Radaza and forged memorandum of agreement (MOA) with the city before Radaza’s last few months of her last term as mayor.

But Chan said they had reviewed the MOA and amended some of its provisions especially to prioritize servicing the Oponganons before supplying mainland Cebu.

Chan said the city would earn 50 centavos per cubic meter as royalty.

He said this was no cost to the city upon installment and completion of the project.

Read more: MCWD chair speaks out: We are not at fault for water crisis

Jose Antonio Soler, CS Water president and CEO, said the cost of the project was at P3.5 billion to produce 60,000 cubic meter per day.

Soler said that this would be the volume of water that they would produce considering the piping capacity installed by MCWD in Mactan Island.

But at the start of operation, they will start producing 25,000 cubic meters per day until the completion of the whole project where it can produce 60,000 cubic meters in not more than 18 months.

“The project can be fast-tracked depending on the situation,” said Soler.

The project will be built in two locations, one at Barangay Marigondon and the other will be at Barangay Punta Engaño.

He said the seawater quality at these locations were good and would not cost more on the process of desalination.

Oliver Tan, CS Water chairman, said he was hoping that they could fast-track the project through the help of the local government unit and concerned national agencies to acquire the necessary permits./dbs