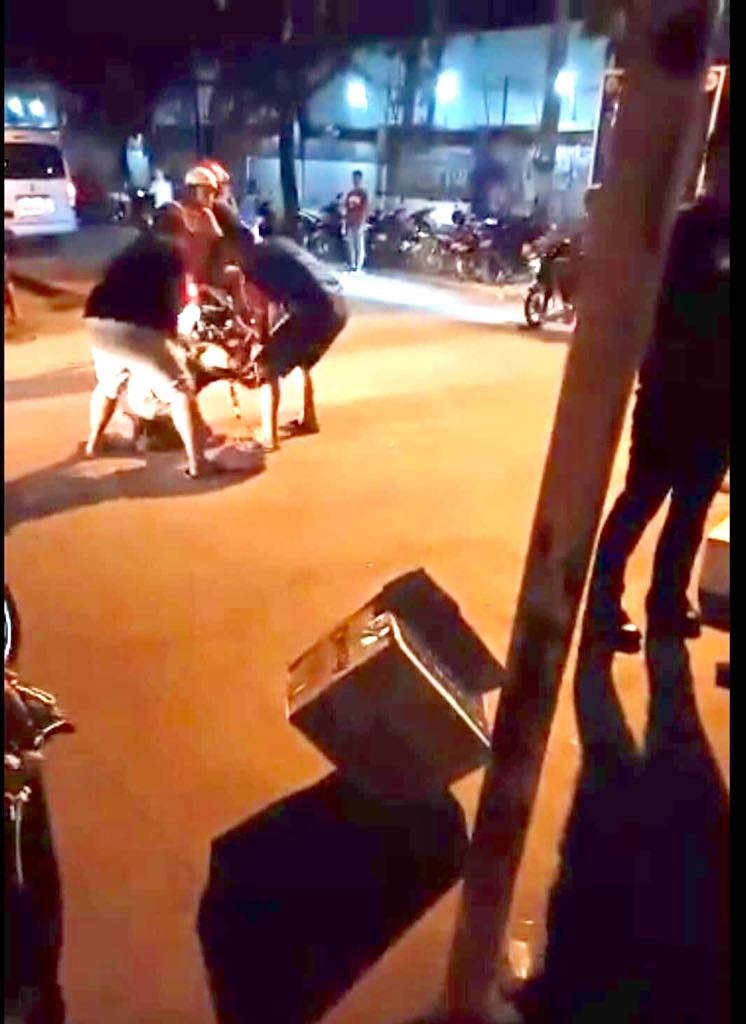 Officers of Lapu-Lapu City Police Office (LLCPO) are caught in a cellphone video violently arresting two men, who turned out to be members of the fraternity organizing the event on November 16 at the Lapu-Lapu City auditorium in Barangay Poblacion. | screengrabbed from Akrho video

LAPU-LAPU CITY, Philippines — Two members of the Alpha Kappa Rho (Akrho) fraternity, who were involved in a scuffle with police officers during the Youth Night activity on November 16 at the city auditorium, promised not to file any charges against the four police officers involved in the scuffle.

Akrho members, Danilo Taghoy Jr. and Paul Pogoy, met with Lapu-Lapu City Mayor Junard Chan on Monday, November 25, and assured him that they would not file a case against the police officers.

Taghoy and Pogoy made the move as a response to Mayor Chan’s call to the fraternity to control its members not to post on social media anything that might escalate or cause more trouble with the police.

(We apologize for what we have done that time, and we are no longer interested in filing a case against them because they are already facing an administrative case.)

Read more: Four Lapu-Lapu cops, who were caught on camera beating a man they arrested, relieved from post

Pogoy also clarified that he had not lost any money during the incident and it was just allegations from his colleagues against the police officers.

Pogoy said that he had already made payments of the expenses of the activity and the rest of the money was intact.

Chan said that he was glad to know that the Akrho leaders had responded to his call to settle with police and to control their members posting words on social media that could start another trouble.

Pogoy told Chan earlier that Akrho leaders would try to negotiate with the police and try to come up with a settlement of the cases filed against them.

Both men were released the following day, November 19, after they posted bail.

Pogoy and Taghoy were violently arrested and detained at the Lapu-Lapu City Police Station 3 detention cell after they scuffled with the four police officers securing the Youth Night event on November 16.

The beat up of the two men was caught in a cell phone video and was uploaded on social media, which prompted the relief of the four police officers, who were investigated and were facing administrative charges./dbs