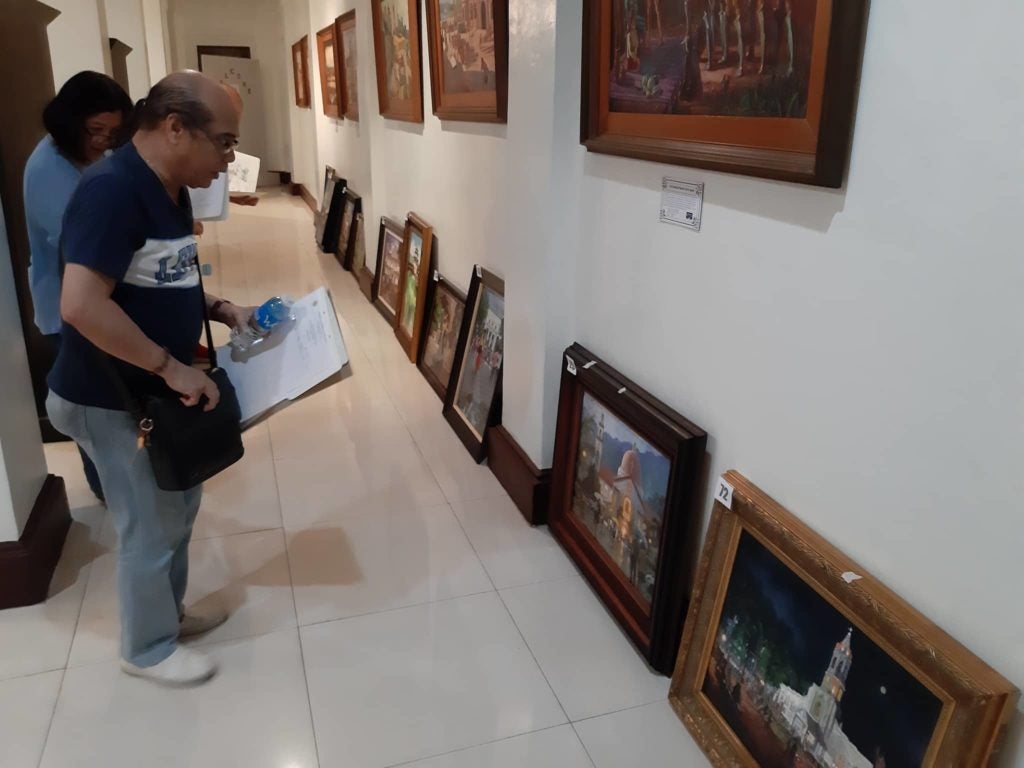 The winning paintings in the Cebu City Arts Week celebration will be placed on display at the Fort San Pedro from March to May 2020 before these will be transferred to the Cebu City Museum. | Contributed Photo

CEBU CITY, Philippines—A painting of the heritage monument in Barangay Pari-an was judged as the best artwork in this year’s celebration of the 4th Cebu City Arts Week.

Dr. Clodoveo Nacorda, a commissioner of the Cultural and Historic Affairs Commission (CHAC) and one of the judges in the painting contest, said that Eyac’s piece was a “beautiful rendition of the heritage monument in Pari-an.”

“Anybody could paint that, but iyahang pag paint man gud (is) very realistic iyang pagka capture. What made it stand out from the other renditions of the same subject is (that) monochrome ang monument. As it is, but iyang gi butangan og lima ka batang laki nga nanglimpyo niya colorful kaayo. The contrast. It was like taking a look at Cebu then and now,” Nacorda told CDN Digital.

Eyac and two other winners in the competition, Jerson Calo (second place) and Antonio Ylanan (3rd place), were recognized during the culmination night held at the Fort San Pedro on Friday, February 14, 2020.

The painting contest was one of the activities during the week-long celebration that highlighted Cebuano artistry and heritage.

Bryner Diaz, officer-in-charge of Cultural Historial Arts Office (CHAO), said that they gave out cash prizes to the winners of the painting competition.

Diaz told CDN Digital that they also commended Barangay Lahug for its participation in the week-long activity.

Diaz said that this year they had an influx of entries in the painting contest comparison with 2019.

“There were 83 entries this year. Timely for the (city’s) 83rd Charter Day celebration,” added Diaz.

The 83 entries were judged by Dean Palmy Tudtud and Professor Raymund Fernandez of the University of the Philippines; renowned Cebuano artists like Mar Vidal and Celso Pepito; and CHAC Commissioner Nacorda.

Narcorda said the judged chose the top three artworks because they stood out from the rest.

Eyac’s entry was an early favorite of the judges.

Nacorda said that Calo also caught the judges attention with his rendition of the busy Colon Street.  His painting also included old structures in the area including the Vision Theatre, which is one of the city’s heritage sites.

A painting of the Cebu Metropolitan Cathedral won third place for Ylanan.

Nacorda said it was a beautifully done artwork that highlighted the Cathedral’s architecture.

“It is not just that, but its the picture nga daghan kaayog taw ang ni sulod ug gawas sa Cathedral. It caught our attention and not to mention how realistic the architectural design of the cathedral was captured,” said Nacorda.  / dcb