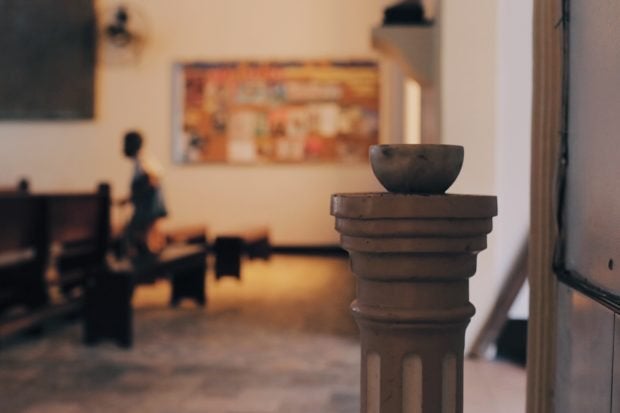 FOR DEVOTEES’ DISINFECTION A bowl for holy water at St. Raphael Church in Legazpi City is left empty on Saturday. The local diocese has instead ordered rubbing alcohol to be made available to parishioners as part of prevention measures against the new coronavirus. —GEORGE GIO BRONDIAL

LEGAZPI CITY, Albay, Philippines — If you are a Catholic entering a church here, don’t expect to find holy water at the fonts where the faithful dip their fingers before making the sign of the cross.

Bishop Joel Baylon of the Diocese of Legazpi has ordered churches under his jurisdiction to empty their holy water fonts and instead place rubbing alcohol dispensers at the entrances.

It was one of the measures taken by the diocese to protect the health of parishioners who still wish to attend Mass, make confessions or join other church activities amid the growing threat of the new coronavirus disease (COVID-19).

Appealing for calm, Baylon said “panic is not the appropriate response” in the face of the rising number of persons afflicted with COVID-19.

He reminded his flock about what he called the “Three Ps”—“prayer, precautions and do not panic.”

The prelate said Masses would still be held in the diocese but, as a precaution, the church had adopted measures that include possible changes in schedule or even cancellation of some Holy Week activities, such as processions.

“Individual confession is also temporarily suspended, the kissing and touching of statues and sacred images are discouraged, holding hands while praying the Lord’s Prayer and shaking hands when giving the sign of peace are no longer needed. A slight bow and smile is a good substitute,” Baylon said in a pastoral letter issued on Saturday.

Holy water fonts are to be kept empty, but rubbing alcohol will be made available at church entrances and parish offices, he said. Church premises should be regularly cleaned and sanitized.

Parishioners who do not feel well are discouraged from attending Mass and other church activities.

The Diocese of Legazpi has three vicariates covering a total of 45 parish churches in Albay province, including the diocesan cathedral, the Parish of St. Gregory the Great, in Legazpi City.

In Iloilo City, the Jaro Archdiocese also advised all its parish churches to empty their holy water fonts — but there was no order to replace them with alcohol containers.

It just directed all those giving Holy Communion to sanitize their hands.

In Naga City in Camarines Sur province, Masses at the Archdiocese of Caceres, the Metropolitan See of the Bicol Region, were suspended starting Saturday until March 20.

The faithful are encouraged to just watch the livestreamed celebration of Bicol-language and English-language Masses on Sunday at 6:30 a.m. and 5:30 p.m., respectively. The diocese will also livestream Bicol Masses daily, starting Monday at 5:30 p.m.

Similar measures were taken by the archdioceses and dioceses in the Visayas, which have either canceled Masses or modified their services.

Both the dioceses of Dumaguete in Negros Oriental and San Carlos in Negros Occidental have canceled all public Masses, with Bishops Julito Cortes of Dumaguete and Gerardo Alminaza of San Carlos also encouraging the faithful to just watch livestreamed or televised services

Cortes said the situation in Dumaguete was particularly alarming since a councilor of Tayasan town in Negros Oriental province had tested positive of the virus and remained in critical condition in a local hospital. Tayasan has been on lockdown while health authorities continued their contact tracing of those affected, he said.

“We have a grave responsibility for the health, safety and well-being of our people. Therefore, after consultations, I have decided to cancel all public Masses, liturgies and related ceremonies starting today, March 14, including Sundays and the 400th anniversary of the Cathedral Parish on Tuesday until further notice,” Cortes said.

Alminaza said that for wakes and funeral Masses, the bereaved family may submit to the parish office the name of their departed loved ones who would then be mentioned in the private Masses of their parish priest. Weddings may be celebrated but there should be fewer than 50 guests and proper distancing and sanitation should be observed, he added.

In Bohol, Masses were shortened to 30 minutes by doing away with the procession of offerings and the singing of the Psalms and some hymns.

In Capiz, the reflections on the Siete Palabras (Seven Last Words of Christ) during Holy Week had been canceled but would just be broadcast on radio or shared via Facebook Live.

The Good Friday procession has also been canceled in the Capiz Archdiocese.

Capiz Archbishop Jose Advincula Jr. also prohibited the kissing and touching of the Crucifix and other religious images.

In Cebu, Masses would continue but Cebu Archbishop Jose Palma said the faithful have the option whether to attend Masses.

“For now, we do not prohibit big gatherings. But nevertheless, preventive and precautionary measures are to be observed at all times,” he said in a circular released on Saturday. “The faithful can sanctify the Lord’s Day (Sunday) by praying in their homes, reading the Holy Scriptures and watching TV Masses.”

Physical contact during celebrations of liturgy and observances of popular devotions were also restricted.

The faithful are discouraged from kissing and touching sacred images. During confessions, there should be an ample length of cloth installed between the priest and the penitent.

For more news about the novel coronavirus click here.
What you need to know about Coronavirus.