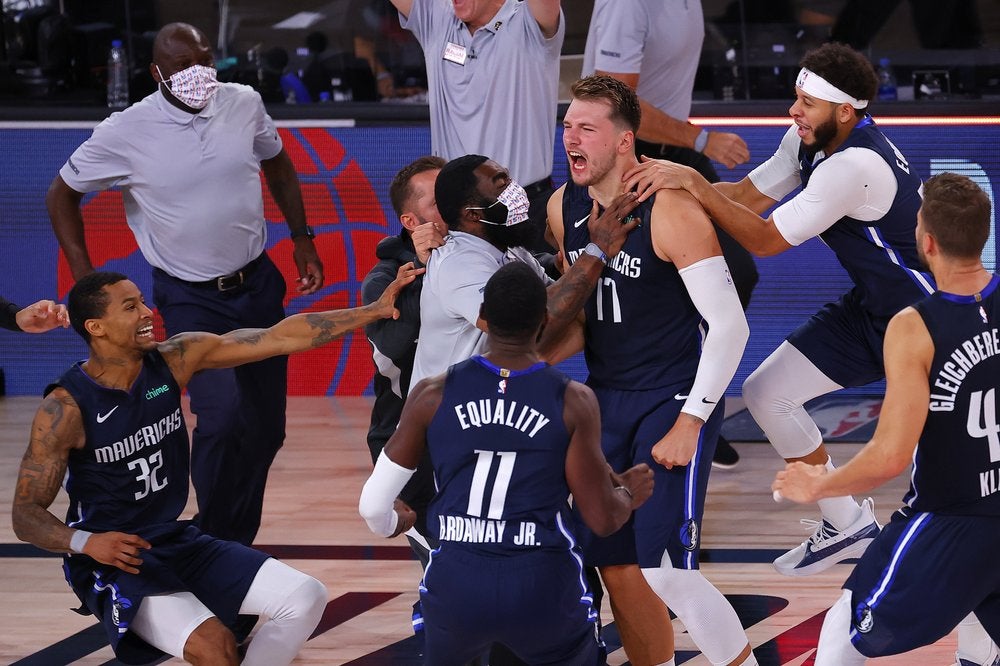 LAKE BUENA VISTA, Florida — Luka Doncic hit a deep, step-back 3-pointer at the buzzer to cap a triple-double on a sprained ankle and the short-handed Dallas Mavericks beat the the Los Angeles Clippers, 135-133, in overtime Sunday (Monday morning, August 24, 2020, Philippine time)  to even the playoff series at two games apiece.

Doncic had 43 points, 17 rebounds and 13 assists for his second straight triple-double.

Marcus Morris hit a 3-pointer with 9 seconds remaining in OT to give the Clippers the lead. It simply set the stage for Doncic’s winner over Reggie Jackson.

The Mavericks had their biggest playoff comeback, overcoming a 21-point, second- quarter deficit. They had a 16-0 run in the third to take the lead — and led by 12 points in the fourth before the Clippers rallied.

Lou Williams tied it at 121 by hitting two of three free throws with 50.6 seconds remaining in regulation. After Dallas failed to score on the next possession, the Clippers called a timeout to set up a play with 24.7 seconds left.

Kawhi Leonard’s 3-point shot with 0.2 seconds remaining was off the mark. The Mavericks failed on a lob toward big man Boban Marjanovic to send it to overtime.

The 21-year-old Doncic was a game-time decision after he hurt his left ankle in the last game. He hardly looked hampered, going 18 of 31 from the floor. He tested the ankle often, too, with jump stops, pivots and an impressive Euro-steps to gain separation.

Doncic didn’t have center Kristaps Porzingis, who sat out with right knee soreness.

Lou Williams scored 36 points for the Clippers, and Leonard had 32. Paul George had nine points as his struggles continued. He was 3 of 14 from the field and is shooting 29 in the series.

Kemba Walker scored 32 points and Boston pulled away in fourth quarter to complete a first-round series sweep of Philadelphia.

Jayson Tatum added 28 points and had a playoff career-high 15 rebounds for Boston. The Celtics advanced to Eastern Conference semifinals against defending champion Toronto.

The Raptors lost Kyle Lowry to an ankle injury in the first quarter but the defending NBA champions had more than enough depth and power left to wrap up the first sweep in franchise history.

Pascal Siakam had 20 points and 10 assists for the Raptors. They upped their record to 11-1 in the bubble. Caris LeVert scored 35 points for Brooklyn.

Read Next
China requires travelers from PH to test negative