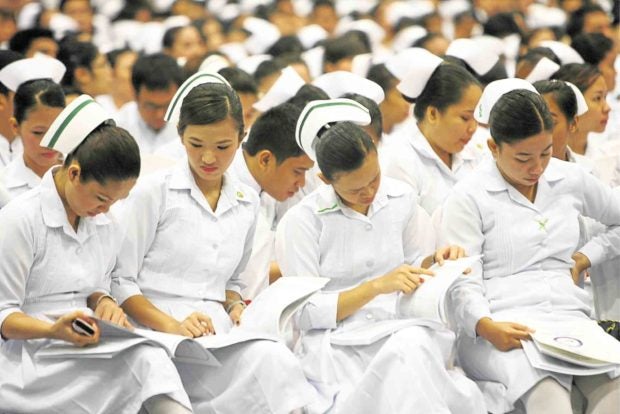 MANILA, Philippines — The government officially lifted the temporary ban on the deployment of nurses, nursing aides and nursing assistants abroad, according to the Philippine Overseas Employment Administration (POEA).

“The moratorium or temporary suspension of deployment of newly hired nurses, nursing aides and nursing assistants is hereby lifted effective immediately,” the POEA said in its governing board’s Resolution No. 17 released on Tuesday.

The nurses’ deployment shall be subject to travel restrictions of the host country and execution of a declaration that the deployed nurses are aware of the health risks.

“With regard to other workers and allied health-care workers, the moratorium and temporary suspension shall remain effective,” said the POEA’s policy-making body led by Labor Secretary Silvestre Bello III.

The POEA further said the annual deployment limit of 5,000 newly hired nurses imposed by the Cabinet-level Inter-Agency Task Force for the Management of Emerging Infectious Diseases (IATF) will take effect next year.

Starting Jan. 1 next year, the POEA will impose an annual deployment ceiling of 5,000 on newly hired health workers disaggregated by occupation.

The limit was imposed, the IATF said, “taking into consideration the national demand for health care vis-a-vis the number of (health-care workers)” during the pandemic.

The POEA also allowed the hiring of health-care workers through government-to-government negotiations.

Around 16,000 health-care workers mostly nurses have been deployed abroad so far this year despite the restrictions, according to the POEA.

The government suspended the deployment of health workers in April supposedly to prevent a shortage of nurses and front-liners during the health crisis.

But nurses’ organizations deplored the deployment ban as a violation of their right to pursue their chosen professions as well as their right to travel, and threatened to seek legal redress of the government’s strictures.

In August, the IATF exempted from the deployment ban health-care workers who have secured employment contracts as of March 8.

A month later, the government allowed medical workers who have secured employment contracts as of Aug. 31 to leave.

On Nov. 20, President Duterte approved the recommendation of the IATF to allow more nurses, nursing aides and nursing assistants to work abroad but at a limit of 5,000 per year.

POEA administrator Bernard Olalia had said they were waiting for the IATF resolution to see the exact coverage of the deployment.