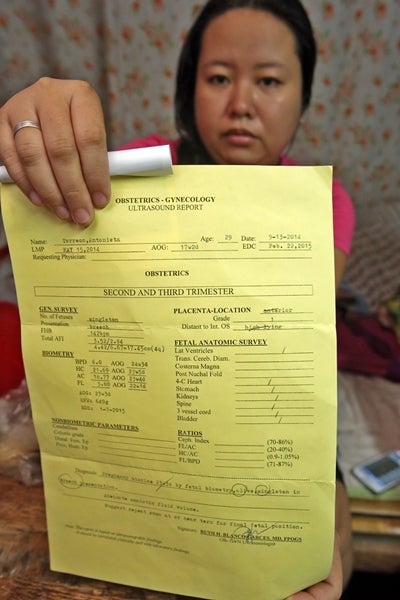 Mrs. Antonieta Torreon, mother of the new born baby who died during delivery, shows the ultrasound report to prove that her baby was still alive before giving birth in the hospital. (CDN PHOTO/JUNJIE MENDOZA)

The 29-year- old mother from Mandaue City who delivered a boy whom the hospital said was a “still birth” challenged the findings by showing results of her ultrasound test .

The baby was still “alive” in her womb a day before she delivered at the government-run Vicente Sotto Memorial Medical Center (VSMMC) in Cebu City.

Antonieta Torreon, who was discharged last Tuesday, showed a copy of the Sept. 13 ultrasound test done at Eversley Childs Sanitarium.

The report was made by Dr. Ruth Blanco Garces of the government sanitarium’s Obsterics and Gynecology department.

Torreon said she still felt the fetus moving in her womb after she was referred to VSMMC the next day.

An official statement from VSMMC on Tuesday said the baby was already a case of “IUFD” or intrauterine fetal death when the mother arrived at the admitting session.

“It’s not true. I know what really happened because I am the mother,” said Antonieta in Cebuano yesterday morning.

The baby was laid to rest at the Mandaue City public cemetery yesterday.

The Commission on Human Rights (CHR) 7 is looking into the case.

Antonieta and her husband Renjie, both fastfood crew workers, said they believe something went wrong in the delivery of their first born because the infant’s neck had a wound and his head was almost detached when he came out.

They also complained that the hospital delayed informing them of the baby’s death or 13 hours after she was admitted.

With this, Mongaya said further investigation will be made.

The Department of Health (DOH) is also waiting for the hospital to furnish records of the case for review.

Suzzette Jabonete, DOH information officer, said a certain Wilfredo Abayo of Tisa Hills Division also filed a complaint with her office and identified himself as the baby’s grandfather.

Antonieta said she was still able to walk when she and her husband arrived Sunday at VSSMC. They were referred to the larger hospital for delivery because of lack of incubators in the Mandaue-based Eversely Childs Sanitarium.

She said she even saw the attending physician, Dr. Charlene Asunciom Laplana, delivering the baby.

Before she was discharged, Antonieta said Dr. Laplana and another hospital official apologized for not immediately informing her family about her son’s death.

The VSMMC said in a media statement that their initial investigation showed that the “baby was so premature that he cannot survive in footling breech presentation.”

In a breech deliver, the baby emerges feet first instead of the head.

They also said the baby was also dead upon arrival at the admission section and denied that his head was cut off.

‘Why didn’t they tell us sooner?’