Poverty seen from above 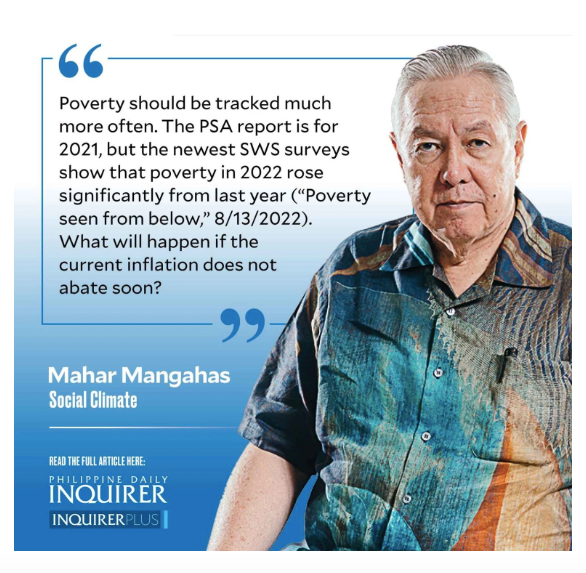 This is the official depiction of the impact of the pandemic on poverty. It comes from updating the official poverty line, and comparing it to family income from the 2021 Family Income and Expenditure Survey (FIES). The FIES is done only every three years, hence the previous reference years 2015 and 2018.

The 2021 FIES was gigantic. Its sample of 165,029 families makes it capable of distinguishing every province (82 of them) and highly urbanized city (33 of them). As usual, the field interviews were done twice, getting a family’s income and expenditures for January-June 2021 in July 2021, and that for July-December 2021 in January 2022.

In the highlights of its report, the PSA puts its 2021 poverty threshold for a family of five at P12,030 per month, for the Philippines as a whole. Its procedure for getting the overall poverty threshold is: (a) estimate the cost of food for minimal nutrition for one day and then multiply by 365; and (b) then estimate the cost of “basic non-food requirements” items by assuming that food accounts for 69.83 percent, and non-food accounts for the balance of 30.17 percent.

“Minimal nutrition” means an average of 2,000 kilocalories per person, and 80 percent adequacy for other nutrients. “Basic non-food requirements,” according to PSA, covers: clothing and footwear; housing; fuel, light, and water; maintenance and minor repairs; rental of occupied dwelling units; medical care; education; transportation and communication; non-durable furnishings; household operations; and personal care. But there is no official allowance for any of these items; the “magic number” 69.83 percent has persisted for a decade already.

The National Capital Region. Let’s take NCR as an example, since Inquirer readers would be more familiar with its cost of living. In NCR, the annual per capita food threshold for 2021, as published by PSA, is P23,028. Dividing that by 365 gives P63.09 for food per person per day.

What kind of food is it? In “Is poverty gone in NCR?” (2/19/2011), I gave the Food and Nutrition Research Institute’s daily menu for NCR: “a scrambled egg, boiled rice, and coffee with milk for breakfast; boiled ginataang monggo with malunggay and dried dilis, boiled rice, and latundan banana for lunch; fried tulingan, boiled kangkong, and boiled rice for dinner; and pandesal for a snack.”

The PSA reports that poor families in NCR rose to 2.2 percent in 2021, from 1.4 percent in 2018. Yet the poverty incidences in both years are so low that it would seem that the NCR’s poverty problem, by official standards, was already solved years ago.

Did poverty decline in some places during the pandemic? The PSA also reports six regions, spread across the country, where the official poverty incidence fell in 2018-21: Cordillera Autonomous Region and Regions II, VIII, IX, XI, and XII. I hope such good news can be corroborated. SWS has no data on these regions since its surveys can only see the broad areas of Luzon, Visayas, and Mindanao.

Poverty should be tracked much more often. The PSA report is for 2021, but the newest SWS surveys show that poverty in 2022 rose significantly from last year (“Poverty seen from below,” 8/13/2022). What will happen if the current inflation does not abate soon?

The PSA recently announced that it is upgrading the FIES frequency to biennial from the present triennial, and that the next FIES reference year will be 2023. That means the next official poverty reading will be in August 2024. Then there would be three official poverty reports in a presidential term, instead of only two. But best of all is for the government to estimate poverty annually.