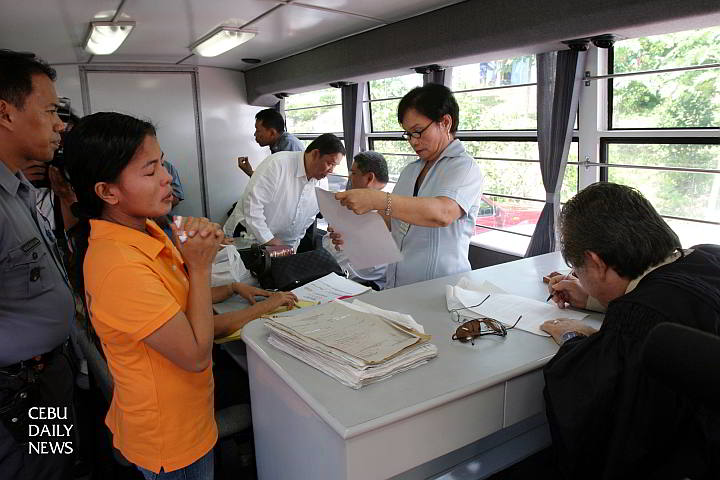 Cebu city inmate Amelia Sario (left), shuts her eyes and clasps her hands in thanksgiving after she’s acquitted of human trafficking in a mobile court hearing before RTC Judge Raphael Yrastorza in this June 30, 2009 file photo. Sario was in prison for one year and eight months. The bus-cum-courthouse is part of the Supreme Court’s Justice on Wheels program. (CDN FILE PHOTO)

Chief Justice Ma. Lourdes Sereno said the judiciary is not deaf or blind to the clamor of prisoners for the speedy disposition of their cases.

“We could not stand the inhuman conditions of our detention prisoners who are constitutionally presumed innocent but are already made to suffer a heavy penalty inside our holding cells,” Sereno said when she addressed the Integrated Bar of the Philippines’ National Convention in Cebu City last month.

She talked about ongoing reforms  to ease clogged court dockets especially in Mandaue and Lapu-Lapu Cities, where more than a thousand pending cases in each trial court contribute to severe overcrowding in jails.

The ideal case load per judge is 500.

Starting last April, 12 judges in Cebu City were tasked by the Supreme Court to share the workload.

For each of the six courts in Mandaue and Lapu-Lapu Cities, two judges in Cebu City were designated to take on newly filed criminal and civil cases to assist  the overloaded judges in both cities.

Whether the stop-gap measure will work – and how long this can be sustained – remains to be seen.

Sereno, in her IBP address, said she wants to set up in all trial courts the “E-Court” or electronic court system to speed up the assignment and management of cases.

In 2013, the E-Court program was pilot tested in Quezon City which has 44 Regional Trial Courts (RTCs) and 13 Metropolitan Trial Courts (MTCs).

Of the 60,000 pending cases in Quezon City, Sereno said about 9,000 cases were resolved by judges in 12 months with the new system.

“The world is changing fast and we cannot waste time and other resources when technology can actually do the trick for us,” Sereno said.

Special computer software will allow judges and court staff  to organize case flows from the filing of complaints up to resolution and enforcement.

There will be electronic filing and raffling of cases; electronic transcript of the hearings; SMS notifications for court schedules and hearings, public information kiosks for updates of cases; an alarm system to remind judges about cases nearing deadlines, and electronic services of processes and subpoenas.

An “automated hearing feature” also allows a lawyer to secure a printed copy of a judge’s verbal order within 15 minutes after it is issued in open court.

“We have been confronted with several problems for decades; problems that we did nothing about. But now, we are serious in trying to make our people feel justice real time,” Sereno said.

“We want to afford all the actors in the judicial system the comfort and convenience of technology while we also address the negative perspectives attached to litigations. These improved processes will reduce litigation costs,” she added.

Another progam to decongest jails is the Enhanced Justice on Wheels where a mobile courthouse hears cases of inmates ready to enter a “guilty” plea during arraignment and those who have served time in jail longer than their supposed sentence.

Twenty courts in Cebu with more than 38,000 cases will be assisted by a team of lawyers and students in an attempt to reduced the case load.

Sereno said the Hustisyeah program reduce by 30 percent the entire docket of Quezon City trial courts where it was first implemented.

DILATORY TACTICS
Not all delays emanate from the court.

Sereno said she’s aware of strategies used by some lawyers  to deliberatley delay court proceedings so they can earn appearance fees or bill their clients longer.

“Judges have been given instructions not to brook delays. In other words, we are giving them much latitude to discipline lawyers who use delay as strategy,” she said.

Sereno also encouraged lawyers to practice legal aid without expecting something in return.

“Lawyers need to be involved (in community service). You can provide appropriate legal service for sector who most need the advice of competent counsel,” she said.

More courts are need to be created in Mandaue and Lapu-Lapu cities, he said.

“At present, however, the judiciary is allotted only less than 1 % of the total budget. And that is really insufficient,” he said.

Why does Mandaue city, the second biggest city, have only three Regional Trial Court (RTC) branches and three MTTCC branches?

Mandaue courts handle cases not just in Mandaue, but from Consolacion, Liloan, Compostela and Cordova.

These courts handle cases from Talisay city, Minglanilla, Naga City, San Fernando and Carcar city in the south.  Total population in the area is 1.4 million.

A few months after, he signed Republic Act 10578 creating seven more trial courts in Lapu-Lapu City. But none of the courts have been set up yet for various reasons.

“They have not yet been funded. That is why we cannot organize them yet,” said Court Administrator Midas Marquez in a recent interview.

“We have yet to appoint new judges and hire court personnel for these courts. Also, the place where the new courts shall be constructed has yet to be identified,” he said.

Marquez said he’s worried about the condition of prisoners in Cebu given a very high congestion rate.

He visited the Mandaue city jail, the most congested in Central Visayas, last year.

“Jail congestion in Cebu is staggering. We just have to seriously monitor the situation so it won’t worsen,” he said.

“I pity the prisoners in congested jail facilities. The rights of inmates has been part of the High Court’s agenda. These detention prisoners are not yet convicted. They have every right to enjoy the benefits and rights of a person who is not convicted,” said Marquez .

His visit at the Mandaue City Jail left him dumbfounded.

“The situation there is simply horrible. When the prison cells were opened, what greeted me was the stench of body odor and the searing heat inside,” he said.

When he was still detailed in Mandaue City, Daomilas said he made sure to prioritize detention prisoners and discourage postponement of hearings.

“In Mandaue, when a hearing for a case is postponed, the next setting will already be a year after. There are just so many cases there. What can judges do if lawyers or the prosecutor is not around?” he said.

Daomilas said he had a policy that postponed hearings shall be rescheduled six months after the delay.

“That means, I had to hear around 50 cases per day in Mandaue,” he said.

Daomilas was recently assigned by the High Court to assist three judges in Mandaue City since his case load in Cebu City is manageable.

PART 1: Mandaue city jail: Most congested in Central Visayas with over 1,000 excess inmates

Read Next
Rama: Improvement, but no tax breaks