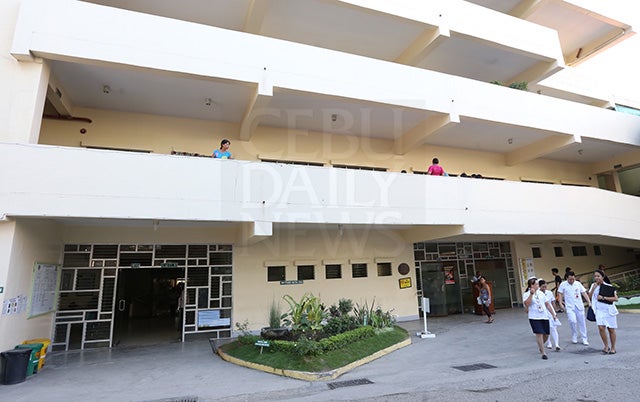 The exit gate of the Vicente Sotto Memorial Medical Center were a woman posing as a nurse walked out on Jan. 4, 2016 after stealing a newborn baby by fooling his parents to hand him over for laboratory exam. (CDN PHOTO/JUNJIE MENDOZA)

Police last night rescued a newborn infant who was snatched from the Vicente Memorial Medical Center less than 36 hours earlier.

An informant’s tip led to a rented room in barangay Lahug, Cebu City, where baby Prince Niño Celadania was safely nestled in a bassinet of blue bedclothes.

Showing no remorse, 26-year-old Melissa Londres, a call center agent insisted the baby was her own, and that she gave birth on Monday in a Holiday taxi cab near the apartment.

“Akoa mana nga bata,” she told reporters without flinching. (The child is mine.)

Until the end, Londres, who is from  Mandaue City, denied kidnapping the infant from the VSMMC or that she had gone to the hospital. 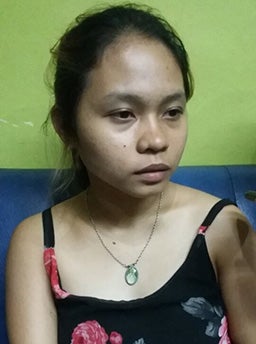 Melissa Alilin Londres, 26, was positively identified by the baby’s father as the woman who posed as a nurse and carried the baby out of the hospital. (CDN PHOTO/APPLE TA-AS)

(I gave birth inside the taxi last Monday nearby BC Homes, Lahug.)

The question of identity was settled when the missing baby’s father, Jonathan, went to the office of the Criminal Investigation and Detection Group (CIDG) 7 and identified the infant as his son and Londres as the woman who stole him.

In near tears, the father Jonathan, a promo merchandizer in Minglanilla town, picked up the infant and cradled him in his arms.

He said he and his wife Javy almost went crazy with grief after they discovered that the woman in an all-white uniform to whom they handed their baby after being told he needed  “anti-dengue shots” was an imposter.

The bizarre kidnapping, which took place at noontime on a busy Monday, exposed a serious security breach in the government hospital where the baby was carried out by a young woman who pretended to be nurse.

A neighbor earlier recognized Londres from news photos  and videos released by police showing  the hospital’s  security camera footage of the mystery woman dressed in white scrubs carrying baby Prince Niño in her arms as she walked through wards and out the exit gate.

The neighbor tipped off a news tabloid staffer who called the CIDG, prompting an operation by Senior Insp. Delfin Bontuyan and SPO2 Roel Leyson.

Jonathan, the boy’s father, pointed to the petite Londres as the woman who had fooled his wife and him to handing over baby Prince Nino.

In a confrontation at the police office, he said in tears, “Ayaw pagingon ana dai kay kinabuhi na imong gikuha.”
(Don’t do that, girl. You took a human life. )

Jonathan  said he was willing to forgive her but insisted that he would press criminal charges.

The child was later brought back to the hospital to be reunited with his mother.

(I did not take the child, but what I can I do, I’ve already been judged. I have no face to show. The child is really mine but I have to say sorry so that I won’t go to jail.)

At one point, Londres argued with the police that her arrest was illegal because there was no warrant.

Senior Inspector Bontuyan explained to her the operation was legitimate  and that a warrant was not necessary because the arrest was done in hot pursuit of a continuing crime of kidnapping.

Asked by reporters if she was willing to prove her maternity through a DNA matching test or medical examination, Londres refused, saying it would be useless.

He said the reward will go to “the rightful informant” and that the hospital was conducting an internal investigation to determine where security lapses were made.

Motive for taking baby a mystery

Until the end, call center agent Melissa Londres, who spoke in a calm voice, denied that she was the woman in the incriminating photos and videos taken in the Vicente Sotto Memorial Medical Center.

This left police investigators wondering  about her state of mind and what could have prompted her to steal a stranger’s baby in a hospital. 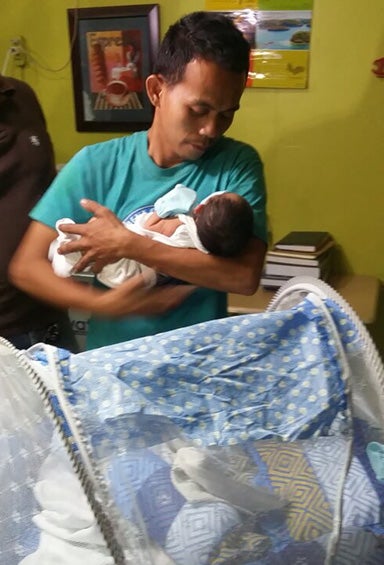 The missing baby Prince Nino is reunited with his father Jonathan Celadania in the police office of CIDG 7. He identified the infant and 26-year-old Melissa Alilin Londres as the woman who posed as a nurse and carried the baby out of the hospital. (CDN PHOTO/APPLE TA-AS)

Senior Supt. Marlon Tayaba, CIDG 7 chief, said there was initial speculation that Londres had suffered a past miscarriage and had “lost baby syndrome”, a condition that still has to be verified.

“Parang nakunan yata at gustong magkaroon ng baby,” he said. (It seems she had lost a child in a miscarriage and badly wanted to have a baby.)

Londres worked as an inbound call center agent in two companies in Cebu  over the past four years.

She  lived in Mandaue City with her family and was a working student when she finished a degree in business administration in the University of Cebu Lapulapu-Mandaue Campus.

Last night, when a police officer tried to prompt her to apologize to the baby’s father for stealing his child, Londres looked the father in the eye, and said, “Sige ni confirm naman, ka sir, so imoha nalang na. Dili nalang na ako.” (All right since you confirmed, the baby’s yours then.)

Londres told reporters she went to Daisy Clinic to have her child undergo newborn screening but to no avail and went home. She said she began her maternity leave from call center work last December 30.

Philip Almeria, her boyfriend for two years, who was also arrested, appeared ambivalent.

He said they split up over a year ago but were still living together. Then he said Londres told him last May that she was pregnant.

When Londres brought home the baby on Monday, he said he didn’t bother to ask details about it.

Police said the couple both could face charges of kidnapping in court.

Read Next
She was scouting for a baby boy