For the second game in a row, the Alaska Aces found their second wind just in the nick of time and used this to derail the feisty Global Port Batang Pier, 82-69, in Game 3 of their best-of-seven semifinals series in the 2016 PBA Philippine Cup last night at the Mall of Asia Arena.

After getting surprised in the series-opener, the Aces have now won the last two games to take a 2-1 series lead. With the starters playing sluggish ball, Alaska’s bench mob once again came through with significant contributions to buoy them to the victory. 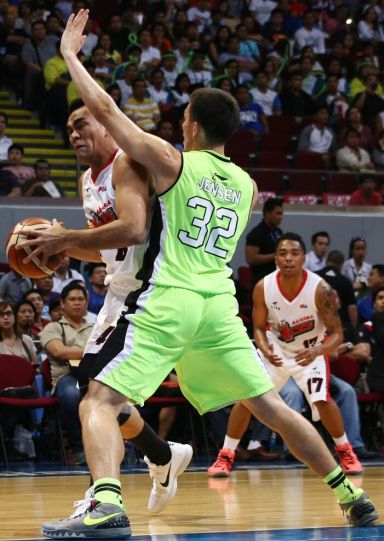 Vic Manuel of Alaska powers his way against the defense of GlobalPort’s Keith Jensen. (INQUIRER PHOTO)

Vic Manuel, a muscled forward who once suited up for the Mandaue-Cebu Landmasters in the defunct Liga Pilipinas, scored 16 points on 8-of-11 shooting in a mere 17  minutes of action while guards RJ Jazul and Chris Banchero added 12 and 10, respectively, with the former doing damage on the boards as well with 10 rebounds. Calvin Abueva did great  things as he too flirted with a double-double with nine points and 15 rebounds.

Jazul’s most important contribution however, was getting Global Port’s star guard Terrence Romeo to react in a heated sequence midway through the fourth. Already shooting blanks all game long, Romeo’s frustrations boiled over as he bumped Jazul during a dead-ball situation which got him slapped with a technical foul – his second of the game – resulting in his ejection with 6:37 left in the game.

Romeo’s ejection was part of a disastrous showing by the Batang Pier in the fourth which saw them get blitzed after taking a 57-54 lead at the onset off a jumper by rookie Roi Sumang. From that point, Alaska’s play on both ends of the floor tightened and sparked a 16-1 run that turned what was shaping up to be a nip-and-tuck affair into a lopsided rout.

Cebuano guard Dondon Hontiveros put Alaska in front for good with a straightaway triple and Jazul, Banchero and Manuel took turns pounding the Batang Pier to a pulp to secure the crucial win.

In spite of his ejection, Romeo still led Global Port in scoring with 17 points.