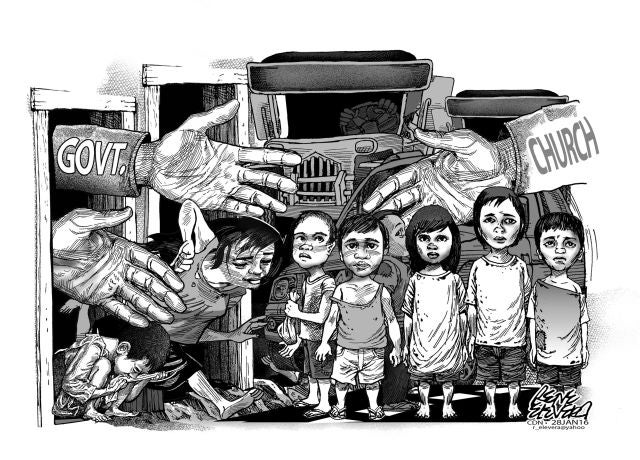 Church officials and Church-led groups like the Dilaab Foundation recently expressed their disapproval over the Cebu City government’s handling of the street children and night dwellers, saying this was palliative and doesn’t solve the problem at all.

By palliative, they mean rounding up — the term local officials prefer is “rescuing”— these street kids and night dwellers and placing them in temporary shelters, like in the case of the ongoing 51st International Eucharistic Congress (IEC).

The Department of Social Welfare and Services rounded up more than 40 of them as of latest count and placed them at the ground floor of the old Compania Maritima building, where they are given folding beds and free water supply at least until the IEC ends; whereupon they are asked whether they would go home or at least find livelihood so they won’t have to sleep on the streets.

While providing them livelihood and a home to live in sounds ideal, the resources of local government units (LGUs) can only be stretched so far without sacrificing basic services, infrastructure projects and other programs for the taxpayers who fund these assistance programs to the poor out of their pockets.

Last Saturday, the Church hosted a luncheon for the poorest of the poor street children as a way of making them feel part of the week-long observance of the IEC.

And speakers during the event have called not only on the Catholic faithful but everyone else to pitch in and help their less-fortunate brethren escape and overcome poverty.

While the message is aimed directly at the government, we also have to point out that the street children and night dwellers are not being maltreated nor treated as inconveniences— though some see them as eyesores— by the Cebu City government, which in fact is cooperating with the Cebu provincial government in dealing with them.

Both the Cebu City government and the Cebu provincial government also have to deal with the problem of settlers, who are slightly better off than the street kids and the night dwellers but whose living conditions are no less uncertain owing to their occupation of lots that are either owned by private persons or by the LGUs.

We’d like to think that government is the be-all and end-all solution to the poverty surrounding us, but they are just part, though a very large part, in solving that problem.

The Church and the community are also integral parts to resolving that age-old problem of poverty; and while they can rant to the heavens about the government’s failure, it’s also time they take government aside and tell it to work with them in providing a better future for the poorest of the poor.

Read Next
Boljoon’s altar retablo and our enduring faith