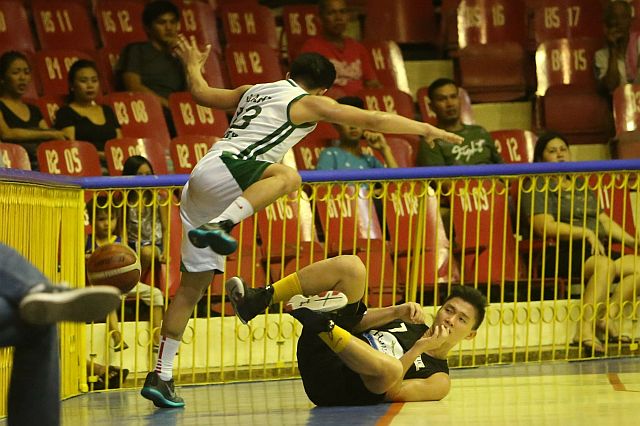 A Worthy-University of the Visayas player tries to evade a fallen Highlands Corned Beef-University of Cebu stalwart in their semifinal match of the 8th Cesafi Partner’s Cup yesterday at the Cebu Coliseum. (CDN PHOTO/LITO TECSON)

Living up to his family name, rookie guard Sheldon Gahi displayed hard-nosed play in the clutch to carry the Worthy-University of the Visayas (UV) Green Lancers past the gritty Highlands Corned Beef-University of Cebu (UC) Webmasters, 86-79, at the start of the semifinals of the 8th Cesafi Partner’s Cup on Saturday night at the Cebu Coliseum.

Thrust into the starring role following the departure of incumbent starter Jun Manzo, Gahi scored six straight points in the last two minutes to push the Lancers into the win column.

Gahi scored 20 points, grabbed two rebounds, and had the same number of assists and steals.

Rey Suerte also had an all-around showing with 19 points, six rebounds, five assists and three steals while team captain Josue Segumpan piled on 15 markers. Reinforcement Bassiere Sackour and Jerome Napao both flirted with double-doubles as the former had 14 and eight while the latter contributed 12 and eight.

But the win did not come on a silver platter for the many-time Cesafi champions as they had to battle back from a 61-54 deficit entering the fourth after UC guard Justine Dacalos put on a scoring display in the third, scoring 12.

UV though, steadily ramped up their intensity on both ends of the floor and later, free-throws by Sackour and Suerte put the Lancers in front, 76-74. But Mark Olmilla shot in a spinning lay-up to trim the deficit in half. Gahi though, was unfazed by the pressure and scored in transition.

Later, he added a floater after another basket by Dacalos to keep UC at bay. Another fastbreak score by Gahi gave UV an 82-76 lead with 30 ticks remaining.

A three-pointer by Dacalos three seconds later gave UC a glimmer of hope but UV snuffed that out and sealed the victory with makes from the free-throw line.

In the second game, the Phinma-Southwestern University (SWU) Cobras survived the Mighty Sports-University of San Jose-Recoletos (USJ-R) Jaguars 81-78 to take a step closer to a finals seat.

Quintin Nzusi stuck it to his former team as he scored 19 points and grabbed 13 rebounds. Mac Tallo added 17, Darwin Barte chimed in with 13 and Jun Luz chipped in 12. SWU faces off against old nemesis UV today with the winner assured of a finals berth.

Read Next
Cebuana gets college grant, appeals for financial help