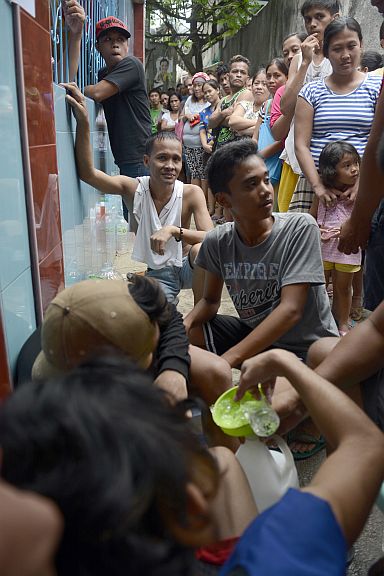 People line up to get “miraculous” water that seeps out of the San Roque chapel’s wall. (CDN PHOTO/CHRISTIAN MANINGO)

Despite the presence of E. coli bacteria in the “miraculous” water seeping out from San Roque Chapel in Barangay Basak Pardo, Cebu City, many people continue to flock to the area to get water, which they believe can cure their illnesses.

Jennelyn Siar, a 33-year-old mother from Barangay Quiot, was with her 5-year-old daughter when interviewed by Cebu Daily News at the chapel yesterday.

She said she visited the chapel after knowing from her neighbors that the water has “healing power.”

Siar has been suffering from cough for almost a week already and was hoping that she would get cured after drinking the bottle of water that she would bring home.

Despite being informed that the water was contaminated, Siar said she would still try it.

Siar was among those who brought bottles and small cups to get water that has been seeping out from the small hole at the outer wall of the San Roque chapel in Sitio Laguna, Barangay Basak Pardo.

Linda Alim, 41, of Basak Pardo came back yesterday to get water from the chapel. She said she applied the water on her toes and knees and the pain started to subside.

Alim has been suffering from arthritis.

Another believer is an old woman who refused to be named from the northern Cebu town of Consolacion.

Liza (not her real name) said her faith has brought her to San Roque chapel. Despite the presence of bacteria, she still believed that the water could heal her ailing sister. She, however, has not yet decided whether to boil the water to get rid of contaminants.

There was also a reminder posted outside the chapel not to take photos of the flowing water. Priority numbers were also distributed to ensure order. Aside from getting water, some people got inside the chapel to offer prayers.

Rennan Cimafranca, head of Regional Epidemiology and Surveillance Unit in Central Visayas (Resu-7) earlier advised the public not to drink the water. Contaminated water can cause several diseases like diarrhea, typhoid fever and Hepatitis B.

The “miraculous” water tested positive for E. coli bacteria during the water quality testings that were conducted by the Cebu City Health department and the Metro Cebu Water District, respectively.

“Despite the presence of chlorine, there is bacteria because the water is already exposed. The water is contaminated because of the open hole,” Kara told Cebu Daily News.

As of yesterday, MCWD could not yet identify the source of water.

The MCWD conducted a leak detection test in an adjacent subdivision the other night, but they failed to identify where the leak comes from.

Kara encouraged residents near the chapel to inform their office if they experience leak in water connections in the hopes of determining the possible source of “miraculous” water.