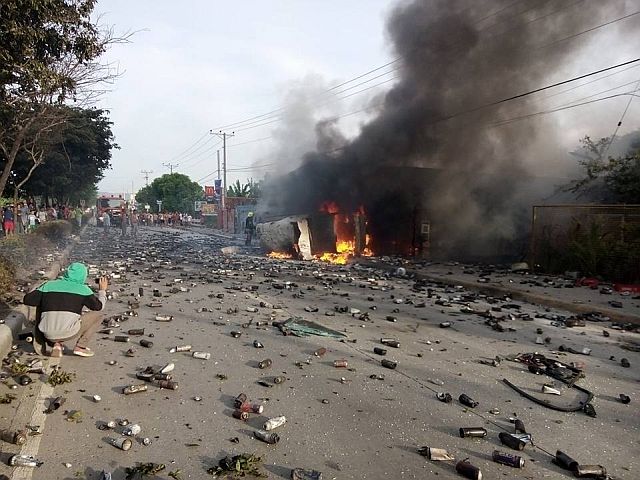 A delivery truck loaded with butane canisters exploded early morning yesterday at the South Coastal Road near the South Road Properties (SRP) after it rammed into a school bus, leaving behind a trail of destruction which a fire investigator described as reminiscent of a “war zone”.

The incident renewed calls to ban the refilling of butane canisters which is considered to be an extremely dangerous business operation.

From a depot in Cebu City, truck driver Edmar Luad , 21, and a resident of Naga City, was on his way to Minglanilla town to deliver the refilled canisters when upon reaching the intersection leading to Barangay San Isidro, Talisay, he saw the traffic light turn yellow.

As he tried to beat the red light at around 6:15 a..m, Luad went crashing into the school service of the Asian College of Technology (ACT) driven by Ricky Geraldez just as the bus was slowly moving to make a left turn.

Luad was able to jump off the truck before the canisters exploded but was later arrested to face charges for the crash that sent 1,200 refilled canisters of butane flying across the highway, burning several other vehicles in a nearby car display center.

Geraldez was injured and brought to a hospital while the three children on board the school bus were unharmed. Luad sustained cuts and bruises.

Talisay City fire investigators said the crash caused the truck to fall on its side which then sparked the eruption of 1,200 refilled canisters of butane.

The accident also caused heavy traffic in the area as motorists were quick to avoid butane canisters that flew across the highway.

Three fire trucks from Talisay City immediately responded to the alarm and controlled the blaze in 15 minutes.

But the blaze left the truck, a multi-cab and two parked motorcycles totally burned while a parked Mercedes Benz and three other cars and a motorcycle on display were also partially damaged.

The accident has prompted a call from Talisay City Vice Mayor Alan Bucao for a ban on the refilling of butane canisters in Talisay.

In Cebu City, Acting Vice Mayor Dave Tumulak called on residents in all barangays to report to City Hall the operations of any backyard refilling stations within their area.

“Butane is supposed to be used once only and not to be refilled,” Tumulak, who authored a proposed city ordinance prohibiting the refilling of butane canisters, said.

Tumulak called on the Department of Energy (DOE), the Philippine National Police (PNP) and the Department of Trade and Industry (DTI) to stop the operations of backyard refilling stations since these are supposed to be illegal, Tumulak said.

According to Tumulak, without the help of the community, backyard refilling stations are very difficult for the city to identify because these are usually found in compounds with high walls.

Since 2010, 44 butane-related fire incidents in Cebu City were reported. The highest was in 2014 with 22 cases as refilling butane canisters became a trend that year.