Alcover not worth Margot’s time 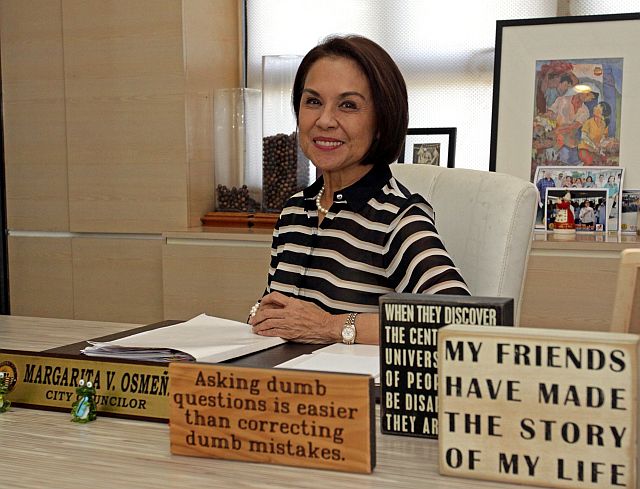 “I don’t want to comment. He is not worth commenting on,” Margot said of Alcover and the four charges he filed against her husband before the Office of the Ombudsman.

Yesterday, Alcover filed graft charges against Tomas for the cash rewards the mayor earlier gave to police for every criminal killed or injured as this violated a 1968 Memorandum Circular prohibiting officials or employees of government from receiving cash rewards for the arrest or surrender of criminals, according to Alcover.

Alcover also raised before the anti-graft body, Tomas’ appointment of deputy mayors, which included his wife, Margot, and the mayor’s alleged non-observance of a mandate to hold flag raising and flag retreat ceremonies under Republic Act 8491 or the Flag and Heraldic Code of the Philippines.

“How will I comment on him? He just comments and comments. He even knows my husband cannot sleep at night. Does he sleep with him?” Margot said laughing.

Reporters could not reach Tomas at City Hall for comment yesterday as the mayor reportedly left to attend a family event in Manila.

His wife, Margot, however, said that Alcover can do and say whatever he wants.
“I think he (Alcover) just needs a lot of attention,” Margot said.

Margot added that even former Cebu City mayor Michael Rama, who is an ally of Alcover, also appointed deputy mayors during his time which included Alcover’s son, Pastor “Jongjong” III.

“In the end we just get details to just make things easier for him (Tomas). I mean we do have his trust and confidence aside from the fact that I’m his wife,” Margot said, adding that deputy mayors have no authority to sign documents for the mayor.

Sought for comment, Cebu City Councilor Sisinio Andales, a staunch Osmeña ally and deputy mayor for peace and order, said that the appointment of deputy mayors by Tomas was nothing new and was never a question before.

“It seems like Alcover cannot move on that Osmeña won in the last election,” Andales said in Cebuano, adding that if he were Alcover, he would first seek the opinion of the Department of Interior and Local Government (DILG) before going straight to the Ombudsman.

“During regular sessions, he just keeps on criticizing the mayor as if Mayor Tommy Osmeña has not done anything right,” Andales said.