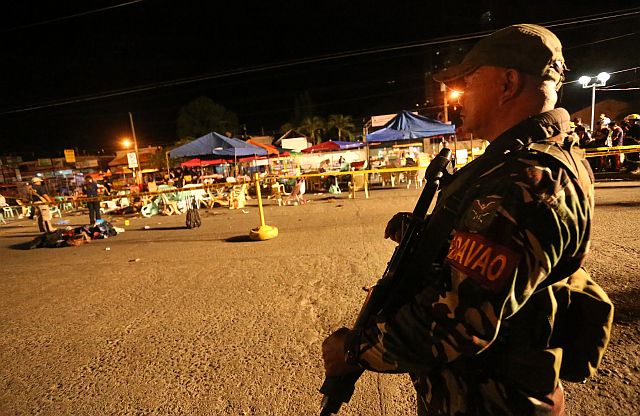 Be safe. Stay at home.

Cebuanos are advised to stay away from crowded places for the time being as authorities led by President Rodrigo Duterte grapple with the effect of Friday night’s deadly blast in Davao City that stunned the nation and claimed 14 lives and hurt 71 others.

In the wake of President Duterte’s decision to place the whole Philippines under a “State of Lawlessness,” Philippine National Police Director General Ronald “Bato” dela Rosa likewise placed all police units nationwide on full alert, directing all regional directors “to strengthen and fortify all police stations, detachments and camps to be double alert.”

This developed as the Department of National Defense said the bandit group Abu Sayyaf may be behind the explosion.

“While nobody has come up to own the act, we can only assume that this was perpetrated by the terrorist group Abu Sayyaf that has suffered heavy casualties in Jolo in the past weeks,” said Defense Secretary Delfin Lorenzana.

In Cebu City, Mayor Tomas Osmeña, as he expressed sympathy with the victims and their families, said the bombing proved that the country, including Cebu, is at risk and that the city government should be prepared to meet a terrorist threat.

“To this end, your city government is going to revive some of the previous operational plans that we executed successfully in the past,” he said. “The first priority is the gathering of intelligence. You cannot fight an enemy you cannot see.”

He said that since terrorists “are, by nature, cowards” and would blend in with civilians in order to attack them, the government would not only need police and military intelligence channels but also the cooperation of the citizenry to aid in their detection.

The mayor said he would not only be asking the help of community-based volunteer security groups, which helped secure the city when it hosted big events such as the Association of Southeast Asian Nation (Asean) summit held here in 2007, but also of the Muslim community in Cebu.

“I will also be asking members of our Cebuano Muslim community to once again be the first line of defense in the monitoring of strangers coming from Mindanao. They were instrumental in helping us in the past in the foiling (of)a major attempt to bomb Cebu. I know they will help us again,” he said.

Osmeña said his biggest concern will be the safety of the crowds during the Sinulog Festival in January next year, saying, “This is the time we are most vulnerable, and this is the time an attack will hurt us the most.”

Cebu City was on alert status within hours after the Davao City bombing, with Nagiel Bañacia, chief of the city’s Disaster Risk Reduction Management Office, advising the public to stay at home if they don’t have any business or work outside.

He also urged netizens to refrain from posting unofficial and unverified reports in their social media accounts to prevent panic. In case of bombing incidents, Bañacia said people should leave the area immediately and avoid taking selfies.

He asked the public to “refrain from calling the hotline number if you don’t have any emergency.”

In Mandaue City, Mayor Luigi Quisumbing ordered that the curfew for minors be strictly observed, which means that those 18 years old and below should not be out on the city’s streets from 11 p.m. to 4 a.m., until the government lifts the red alert status imposed on the entire country.

Quisumbing also asked residents that all “non-essential visits to public places be minimized for the time being.”

“The PNP will also be conducting checkpoints in key areas of our road network,” he said.

The mayor called on the city residents to cooperate in order to ensure their safety and report any suspicious person or activity to the 911 hotline or the city’s command center.

“I would like to emphasize that there are no current threats to the city, but I will also not allow any complacency,” he said.

Lapu-Lapu City will also be enforcing its own curfew ordinance for minors, from 10 p.m. to 6 a.m., until the current red alert status is lifted. Mayor Paz Radaza advised her city’s residents to remain calm but vigilant.

Lapu-Lapu City Police Office acting director Senior Supt. Rommel Cabagnot said that based on the directive of Police Regional Office in Central Visayas (PRO-7), they will conduct mobile checkpoints in the city round-the-clock.

“The government should not rest until these networks are defeated and dismantled. The Duterte administration will have the full support of the Cebuano people in the search for justice and put all those responsible behind bars,” Davide added.

Security in all ports in Cebu City and province has been raised following the bombing in Davao, said Glenn Sarador, chief for the port police unit at the Cebu Ports Authority (CPA).

There will also be a lot of police checkpoints across Central Visayas, said Chief Supt. Noli Taliño, the region’s police director.

“More police patrollers are now on the streets and places of convergence like malls, terminals, airport, and seaports,” he said.

Taliño said the Police Regional Office in Central Visayas (PRO-7) had not received any threats from groups, but this should not be a reason to be complacent.

“I urged all policemen to be alert at all times and to ensure public safety and order,” he said.

Maj. Abel Potutan, spokesperson of the Armed Forces Central Command, said they will assist the PNP in ensuring the safety of people in the Visayas.

“Our troops are ready to support the PNP in any eventualities. We have also directed our subordinates to conduct visibility patrols on the streets,” he told the Inquirer over the phone.

Security at the Cebu South Bus Terminal (CSBT) will also be strengthened, especially on weekends, which are the busiest days of the terminal.

“We are tightening our security in our entrances and (securities are ordered) to be very vigilant to unattended bags. So we ask the public to be very patient because we are really strict on inspection of bags,” CSBT head Joey Herrera said.

Read Next
Napolcom gives back Tomas’ power over PNP