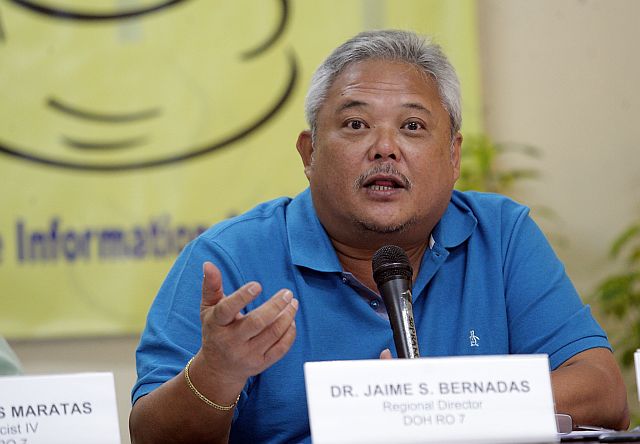 The Department of Health (DOH) announced yesterday that there are six new cases of the mosquito-borne Zika virus in the Philippines recorded this month, one of which was reported in Cebu.

Dr. Jaime Bernadas, director of the DOH in Central Visayas, confirmed the new case in Cebu in a text message to Cebu Daily News last night.

This would be the second case reported in Cebu. The first happened in 2012 involving a foreigner.

Bernadas declined to give details of the Zika virus case since, he said, only the spokesman of the DOH central office in Manila has the authority to release more detailed information on the six new Zika cases, including the location of the infected persons.

Bernadas, however, assured that the public has no reason to panic, stressing that Zika is not a fatal disease, unlike dengue fever, also a mosquito-borne disease, which can be life threatening to its victims.

While Bernadas declined to provide information on the Cebu victim, a reliable source, however, told CDN that the victim is a woman who is 19 weeks pregnant and was admitted in a private hospital in Cebu City from September 9 to 12.

Bernadas, when sought to comment on the information gathered by CDN, would only say that the woman would not need to be isolated and could stay in her own house.

He said a team from DOH-7 was also sent yesterday to the clinic of the obstetrician gynecologist where the pregnant woman does her regular checkup to gather information on her case.

DOH-7 was actually alerted of the woman’s condition since the other Monday, revealed Bernadas.

Bernadas also explained yesterday that this was not the first Zika virus case in Cebu.

The affected woman in 2012 was a foreigner who did not know she was infected by the Zika virus until she had returned to her country of origin, Bernadas said.

The six new cases brought to nine, the total number of persons in the Philippines infected with the Zika virus, according to a report posted on the website of the Department of Health (DOH).

Of these nine cases, six are women. Affected ages range from 9 to 49 years old, the DOH said, quoting a report from the Research Institute of Tropical Medicine (RITM).

Out of nine cases, seven are from IloIlo City, one from Cebu City and one from Laguna Province, the report added.

“All cases had no travel history to other countries within a month preceding (the) onset of illnes,” Health Secretary Paulyn Jean B. Rosell-Ubial said in the report posted on the DOH website.

“All presented with skin rashes accompanied by joint pains or fever or conjunctivitis and are expected to have recovered by this time,” the Health secretary added.
She said the DOH has sent quick response teams to the affected areas in the country.

Bernadas yesterday encouraged those who have the symptoms of the virus to go to their nearest health centers or hospital.

Barangay health centers and hospital staff are trained how to handle such cases, he said.

“Everyone is vulnerable, but those pregnant women should be extra careful since it can affect the child (she is carrying),” he added.

A pregnant woman, who is infected with Zika, can pass the virus to her fetus and can cause brain-related birth defects to the child.

The virus can also be transmitted by an infected person to her or his sex partner.

Zika is transmitted by the aedes aegypti mosquito, which is the same carrier of dengue fever, said Bernadas.

Those, who contracted the virus, display symptoms like fever, rash, and conjunctivitis, joint pain, muscle pain, headache, and vomiting that last for two to seven days.
There is no vaccine or medicine as yet for the virus.

According to Bernadas, a specimen (blood sample) of a person suspected to be infected with Zika virus would be needed for a laboratory test.

All the hospitals in Cebu are capable of handling blood testing for Zika virus but only the RITM, which is based in Manila, has the authority to confirm the presence of a virus in a particular patient, he said.

He also reminded the public that dengue fever, which is hemorrhagic, is more likely to be fatal than Zika.

“There are also cases with local transmission. As long as there are these mosquitoes (aedes aegypti ) then there is always a possible transmission of the virus,” he added.

Bernadas said that just like the advisory on preventing dengue, the public is again reminded to keep the environment clean at all times and for residents to get rid of stagnant water in their homes.

The DOH has also reiterated its efforts to prevent the Zika through the “4S” strategy that requires to search and destroy mosquito breeding places; to take self-protection measures that include the use of insect repellent and mosquito bed nets and use of condom for protection against sexually transmitted infection; to seek early consultation for skin rashes, fever, joint pain or red eyes; and to say yes to fogging when there is an impending outbreak.

According to Bernadas, there is no travel advisory yet against the Philippines involving Zika virus since the advisory is only made against countries where the Zika cases have reached epidemic proportion.

But the US Centers for Disease Control and Prevention, in a primer on Zika posted on its website, advised that pregnant women should not travel to any area with Zika.

“Travelers, who go to places with outbreaks of Zika, can be infected with Zika, and Zika infection during pregnancy can cause microcephaly and other severe fetal brain defects.” it said.