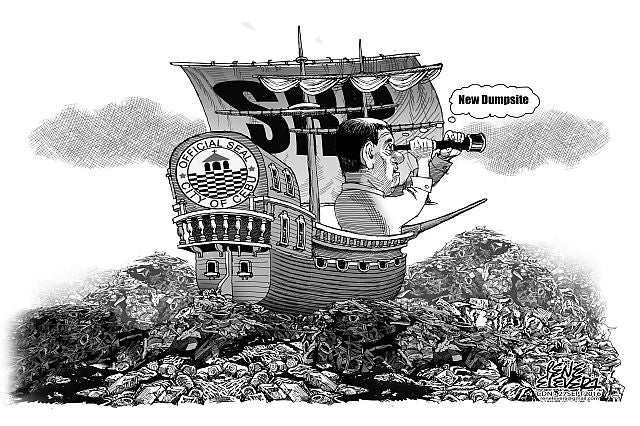 The filing of the Writ of Kalikasan by Cebu City Councilor Joel Garganera comes as the Cebu City government said it had complied with six of the 13 requirements set by the Department of Environment and Natural Resources (DENR) for the Inayawan dumpsite.

That said, it’s a question of time insofar as the Court of Appeals ruling on the writ petition is concerned. We all know how the court system operates in this country and it would perhaps be a miracle if the court rules early, but it’s still lodged there as a reminder to Cebu City Hall that they need to act fast in resolving the city’s garbage problem.

Cebu City Mayor Tomas Osmeña earlier retorted that he has no qualms about dumping the city’s garbage either in the North Reclamation Area (NRA), the Malacañang sa Sugbo where Presidential Assistant for the Visayas Michael Dino holds office, or at the South Road Properties (SRP) where some businesses have begun to operate and complained about the unending stench that becomes more pronounced when the winds pass through their area.

What it all boils down to is the insistence by Garganera, his allies at the Team Rama bloc in the City Council and their support groups for the Osmeña administration to return to the previous arrangement made by former mayor Michael Rama of paying the substantial tipping fee and delivering the city’s garbage all the way to that private landfill facility in Consolacion town.

Unless DENR Secretary Gina Lopez steps in and requires the mayor to do just that, there is no way that Osmeña will agree to it, and we wonder if there is truth to his claims that air quality in the areas affected by the landfill has improved.

Again, it would be better if DENR conducts a weekly monitoring of the air quality in these areas with the city paying for it if need be.

This contradicts the previous assessment of former allied councilors Nida Cabrera, a noted environmentalist, and Roberto Cabarrubias that the Inayawan landfill is good only for an additional two, three or four years.

Is Cebu City so bankrupt that it cannot afford to build its own landfill site? Should the city government be so stingy that it refuses to use the proceeds of the sale from the lots at the SRP not only to fund another landfill site but for other programs that would benefit not only the city’s scholars but other sectors and the city’s constituents?

The answer lies in the mayor, who doesn’t want anyone to dictate on him and prefers to chart the city’s course on his own terms.

Read Next
Losses and resolution