No compromises on safety 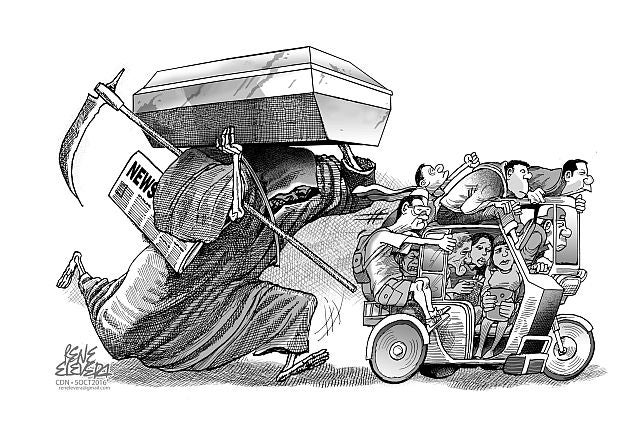 Public safety and convenience are paramount when it comes to issues concerning mass transportation, but let’s also consider the viability of tricycles as a livelihood for Metro Cebu residents who can ill-afford to pay for a franchise for jeepneys and buses.

So long as they don’t ply through national highways, which they are prohibited by law to do so, and they stay on their assigned routes, there should be no problem theoretically. Unfortunately, that’s not the case in reality since like many passenger jeepney drivers, they load and unload passengers as they please and they either ask
or demand understanding from the riding public whom they have caused inconvenience not a few times.

And we’re not even talking about safety which was probably the chief reason why personnel of the Traffic Enforcement Agency of Mandaue (Team) were apprehending tricycle drivers who had overloaded passengers in violation of an existing ordinance.

The arrests resulted in last Monday’s march rally by tricycle drivers in front of Mandaue City Hall in which they demanded, among others, a meeting with Mandaue City Mayor Luigi Quisumbing to explain their side on the issue.

The mayor’s Facebook post should put to rest any doubts on where the Mandaue City government stands on the issue. In it, he said those with franchises should not be worried about the apprehensions since the city government is merely implementing the existing ordinance on overloading.

In fact, there is a need to revisit and amend the existing ordinance that allows tricycles to load as much as five passengers regardless of their size and comfort level and convenience. These drivers do it by placing extension seats that would allow them to maximize their tricycles’ seating capacity regardless of how big their passengers are or how comfortable the seating arrangement actually is.

We have yet to determine if the ordinance has any specific maximum allowable seating capacity for tricycle drivers, but there should be one, and the guiding rule should be safety and comfort. Any compromises on both should be grounds to reject their application for franchise.

If this sounds too harsh or unreasonable, then these tricycle drivers and operators should do better than stage rallies in front of City Hall to make their case with the riding public who had suffered the inadequacies of the country’s mass transport system.

If the tricycle drivers and operators think they are being shortchanged by the strict enforcement against overloading, they should cite specific cases of abuse committed by Team.

Otherwise, the equitable implementation of the law should not compromise in any way, shape or form public interest and welfare in favor of allowing transport operators and drivers to earn extra income at their expense.

Read Next
Peace and order vs rule of law