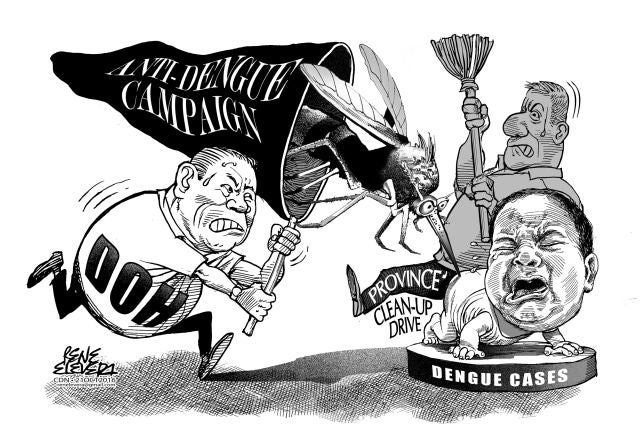 Regardless of whether or not they have the funds, the provincial government has some explaining to do on why there is a continued increase in the number of dengue cases in Cebu.

The Provincial Board’s (PB) passage of a resolution declaring the province under a state of calamity in relation to the more than 5,000 cases of dengue recorded by the Provincial Health Office (PHO) came amid the Department of Health’s (DOH) questioning of the basis for the declaration.

The difference between the number of actual dengue cases recorded (DOH) and the prevalence rate of the dengue cases (PHO) as basis for the declaration of a dengue outbreak apparently may mean little to the public who only see the 5,000 plus dengue cases as an immediate concern.

But this difference is critical in relation to mapping out as well as allocating funds for plans and programs to resolve the problem, and while local governments resent the bean counters and accountants of the Commission on Audit (COA), there’s no going around them when it comes to spending taxpayers’ money, which is as it should be.

There’s no question that something should be done to lower, if not eliminate, the incidence of dengue cases in the province, but due to the constant failure of communities and the local governments to maintain clean surroundings and implement basic preventive health measures, there will always be more dengue cases and other ailments in both the urban centers and the countryside.

Realistically, LGUs can lower the number and the incidence rate of dengue cases, and this doesn’t require the use of larvicides which the DOH noted alarmingly as a common method employed by local governments to drive off dengue-carrying mosquitoes out of their areas.

That the DOH statement rendered Cebu Gov. Hilario Davide III uncharacteristically defensive and caused him to say that the national health agency should instead support their provincial office rather than contradict it shows that something is wrong with the Capitol’s way of dealing with dengue.

There were allegations that the declaration of a dengue outbreak was made to justify the acquisition of chemicals for use on spray-misting operations on stagnant water and other breeding grounds for the dengue-carrying mosquitoes.

As per latest report, the Provincial Board said it would conduct a massive cleanup campaign in the province, a belated effort considering that the DOH had already advised local governments against using spray-misting since it would only cause the mosquitoes to develop immunity to the chemicals.

There is no evidence yet of any “funny business” in the province concerning the purchase of spray-misting chemicals and equipment, but we know the Capitol can do better than that in protecting their constituents from the dengue menace.

Read Next
Sacrifice and reasonable compromise