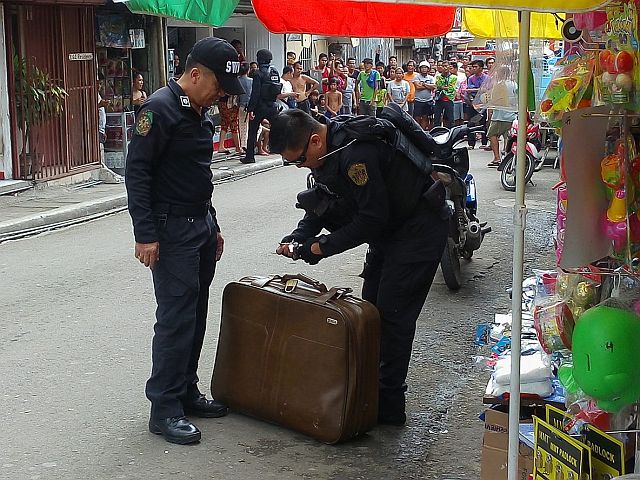 A luggage that was left for hours in front of a vendor’s stall in Cabantan Street, Barangay Luz in Cebu City threw the residents into a panic on Tuesday morning.

A brown leather luggage bag was left in front of a street vendor’s stall since 7 a.m. and residents began to get alarmed that it might contain an explosive when no one came forward to claim it.

According to Barangay Peace and Security Officer (BPSO) Dante Palconit, the bag turned out to be owned by Eucario Ladan, 72, a native of Leyte and a former BPSO for Barangay Kamputhaw, who had just arrived from Boljoon that morning and was on his way to his residence when he left his luggage unattended for three hours.

Allan dela Peña, an off-duty BPSO who parked his motorycle-for-hire near the area, noticed that agitated residents were beginning to gather around the luggage and immediately notified Palconit and the rest of the BPSOs.

Palconit then requested for personnel from the Special Weapons and Tactics Team (SWAT) to examine the bag.

Minutes after the SWAT begin to examine the bag, Ladan arrived to claim it.

According to Palconit, a female resident said she saw an old man, who she described as feeble, alight from a jeepney with the luggage.

“She said the man told her he was only going to look for a vehicle and would come back immediately after she had called out to tell him that he had left his luggage,” said Palconit.

Ladan however failed to return for his bag for three hours arousing suspicion.

Palconit said Ladan must have forgotten about his bag and could already be senile due to old age. Ladan is currently at the Luz Barangay Hall and will be brought to his home in Barangay Kamputhaw on Tuesday afternoon.