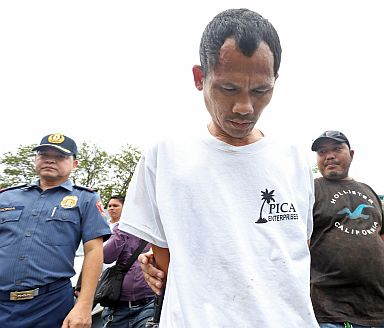 Both victims eventually succumbed to their injuries just as Sanchez, whom police found was an alleged drug user and treated twice for a mental illness, was arrested.

Sanchez said he was allegedly angry at Gerik because he blocked the entry of the cement mixer to the construction site that he was guarding.

He is now facing a murder charge, a non-bailable offense, at the Regional Trial Court for the death of the senior Paderanga.

Prosecutor Ma. Johanna Desamparado-Calustre of the Cebu City Prosecutor’s Office found evidence to charge him for the crime.

Calustre said Sanchez was armed with a 9mm pistol and had deliberate intent to kill the two victims.

Filed last January 5, the case was raffled to the sala of Judge Marivic Trabajo-Daray of the RTC Branch 17, with Sanchez’s arraignment set on Jan. 16.

Goering, the husband of Judge Sylva Aguirre-Paderanga of the RTC Branch 16 in Cebu City, succumbed to three gunshot wounds in the body while his son, Gerik, eventually succumbed to his injuries a few days after.

No autopsy was conducted on both Paderangas, who were immediately laid to rest at the Angelicum Garden of Angels in Mandaue City in deference to their wish to be buried 24 hours after their death.

Goering Jr. filed a murder complaint against Sanchez last December 28, attaching the affidavits of two witness who identified the security guard as the one who shot his father.