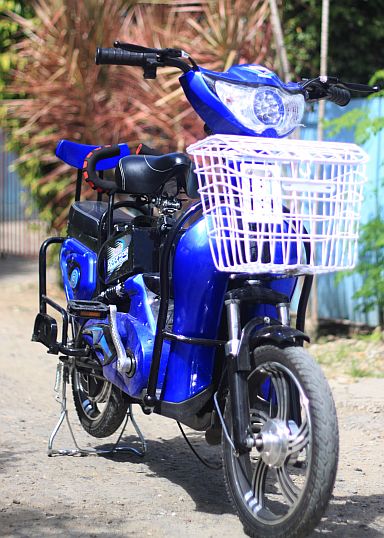 The Ridge variant of the California Eco-Bike. (CDN FILE PHOTO)

LOCAL electric bike dealers were worried their sales will drop if the Land Transportation Office (LTO) started apprehending users without licenses and whose vehicles had no registration with the agency.

Mae Boybanting of Kingbon Electric Bike Shop, whose main store is located in downtown Cebu City, said e-bikes are attractive due to the premise of not having have to apply for licenses and registration to operate.

But “if this is what the LTO plans on doing, then we will comply. We will even offer to facilitate the registration of our buyers’ units,” she said by phone Tuesday.

The manager of a hardware store in southern Cebu was also worried about a drop in sales of e-bikes if they will be required to secure LTO licenses but have no choice but to comply with the LTO order.

The manager, who asked not to be named for lack of authority to speak on the matter, said business was brisk when they started selling e-bikes in 2010 but has since dwindled due to the entry of more competition.

Since the opening of its shop in Cebu City last September, Kingbon has sold an average of four to six units a month, for a price ranging from P25,000 to P39,800 per unit, depending on the model.

Kingbon also has branches in the cities of Mandaue and Talisay.

Sales surged to more than 20 units last December as the gift-giving season kicked in, Boybanting explained.

The shop’s e-bikes are imported from China, she added.

The southern Cebu-based hardware store also has e-bikes from China, which come in four models sold from between P16,800 to P20,400.

The LTO has become worried about the rise in number of unregistered e-bikes driven by unlicensed operators in the area.

According to the agency, many people think these vehicles are not covered by the law especially because there are marketing materials stating that there is no need for registration when buying units.

LTO said these vehicles are covered by the Land Transportation Code and those who sell or buy e-bikes cannot say they did not violate the law just because they didn’t know about it.

“You shouldn’t operate an (e-bike) if you don’t have a license. The presumption is you didn’t receive training. Registration is a mandatory requirement for insurance,” an LTO official said in an ABS-CBN report last week.