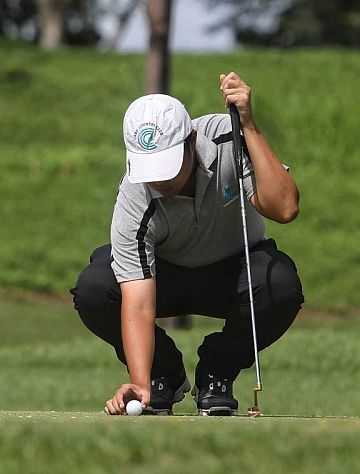 Davao City — It was a finish the Cebu Country Club (CCC) golfers would rather forget.

Still in contention despite staring at a nine-point deficit going into Saturday’s final round, the Cebuanos, expected to make a solid pitch to defend their crown on the final day, unexpectedly submitted their worst score of the tournament to tumble all the way down to fifth place in the Founders division of the 70th Philippine Airlines (PAL) Inter-Club Golf Tournament at the challenging Rancho Palos Verde golf course, here.

CCC, which dropped to third place on Friday, was unravelled by uncharacteristic blunders allowing Orchard Golf and Country Club to run away with the division crown with 480 points after yesterday’s 117 anchored on the 31 of Rodel Mangulabnan.

“We did not play well. Our rivals have also vastly improved,” CCC’s Jovi Neri, who scored 30 points in the third round said. “We have the same core of players while our rivals have new, younger and stronger players.”

“It’s not the first time that we experienced this kind of situation. There were times that we finished badly but still managed to bounce back and win the next year. I am confident that we can reclaim the title.”

Mark Dy’s absence also played a key role in CCC’s downfall this year. The Interclub veteran was on a trip abroad, CDN learned.

Mactan Island Golf meanwhile, finished third in the Sportswriters division with 368 points. Saranggani amassed 377 to snatch the title from Sta. Elena which finished two points from the champions.

Scoring for the hard charging Mactan were Russell Bautista with a scorching 34 points, Elvis Jequinto with 24, Romeo Aguilon with 21 and the 19 of Eddie Benigay.

Alta Vista Golf and Country Club Club was another Cebu squad that tumbled on the final day. AVGC dropped to 6th overall from third on Friday in the Aviators division with 361 points after limping home with an 81 yesterday.

Manila Southwoods completed a grand slam in the Championship division with 547 points, a record 44 ppoints clear of second placer Canlubang.