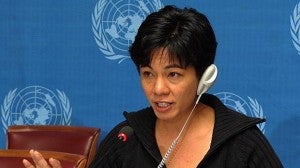 A daughter of a Cebuano journalist has been appointed  “global chief of media” of the United Nations Children’s Fund (Unicef).

Marixie Mercado, youngest daughter of newspaper columnist Juan Mercado, is currently the Unicef’s spokesperson in Geneva, Switzerland, but is set to assume her new position in the international organization soon.

The staffing changes in Unicef’s Division of Communication was announced Thursday.

As spokesperson for Unicef in Geneva, Mercado has helped bring to the world’s attention the situation of children such as the countless who died and are still at risk from cholera in East Africa, the victims of the violence in Yemen, and the need to help children in Syria, among many other countries.

Mercado has several years of experience in the media having worked as a reporter for Gannet in New York before joining the Agence France-Presse (AFP) in Paris.

She studied at the Columbia University’s School of International and Public Affairs.

“We share our joy and gratitude over our daughter’s new posting,” her father, Juan, told Cebu Daily News where he writes an opinion column.

An article in the Columbia University website said Marixie was born in Manila in 1970 but moved to Thailand when her father, who worked with the UN, was assigned there.

The elder Mercardo started as a reporter in the Cebu-based Southern Star, in the early 1950s before joining the Evening News in Manila, covering the Senate and later becoming its associate editor.

He covered the United Nations (UN) in New York and served as a correspondent for foreign publications that included London’s Financial Times and Honolulu’s Star Bulletin.