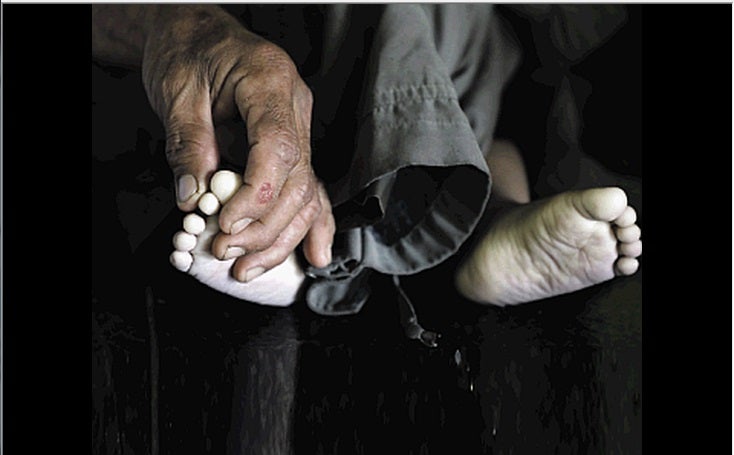 LOVING TOUCH. Celedonio Laping Sr. touches the foot of his barely two-year-old grandson Vience Ian Durano who drowned along with his wife Arsenia when a flash flood swept through his home in Carmen, Cebu at dawn on Easter Sunday, April 16, 2017. CDN PHOTO/TONEE DESPOJO

Matters related to security and fear of terrorist attacks have momentarily taken a back seat as heavy rainfall spawned by tropical depression “Crising” caused widespread flooding in Cebu, leaving at least nine persons dead, half of them children.

The flood also left two persons missing, injured ten others while displacing at least 60 families in Cebu City and 300 families in Carmen town.

It was the first time in many years that it rained in Cebu on Easter Sunday, according to government weather specialists.

The continuous rain experienced from 3 p.m. of Black Saturday to 2 p.m. on Easter Sunday was so heavy, it was recorded to have reached 82.3 millimeters, or almost double the 50 mm rainfall projected for Cebu for the whole month of April.

The rain dumped on the island was equivalent to at least 365,000 drums of water for every square kilometer, according to data from the Philippine Atmospheric, Geophysical and Astronomical Services Administration (Pagasa) on Mactan Island.

The bulk of the rainfall amounting to 68.2 mm was recorded when it rained hard from 1:45 a.m. to 5:06 a.m. on Sunday, Pagasa-Mactan weather specialist Meo Aguirre said.

The rain caused rivers in Carmen town in northern Cebu to overflow, with surging water slamming on houses at dawn on Easter Sunday, sweeping away at least ten residents, eight of whom were later found dead, half of them children. The two other persons from the town were still missing.

Another person was also reported to have drowned after he was swept away by a flash flood in Danao City.

In Minglanilla town in southern Cebu, a stage meant for a drama presentation during the crowd-drawing Sugat sa Minglanilla collapsed at past 12 a.m. on Easter Sunday, injuring ten people, one of whom required hospitalization.

Elsewhere in Cebu, ankle- to chest-high floods were reported in low-lying areas in the central cities of Cebu, Mandaue and Talisay, and to as far as Danao City in the north and Dumanjug in the south.

Even as floodwaters receded in many parts of the metropolis at noon yesterday and with the weakened “Crising” downgraded to a low pressure area, thousands of residents in Cebu continued to reel from its effects, with many having had to deal with the aftermath of flood-damaged homes and destroyed properties.

The bodies of Sencio and her children were found floating in Barangay Dawis Norte, about 5 kilometers from their house in Barangay Duwalog, Carmen, said Julius Regner, PDRRMC spokesperson.

Two others were reported missing in Carmen but he had no details yet on the victims, he said.

But he said that floodwater remained manageable in the southern part of the province because rainfall was not very heavy in these areas.

In Minglanilla, 16 km south of Cebu City, heavy rains triggered the collapse of the portion of the stage built for the annual Sugat Kabanhawan, injuring 10 persons including three minors.

Nine of the victims were brought to the Minglanilla District Hospital for treatment of minor injuries while one who suffered from a fractured leg was brought to the Don Vicente Sotto Memorial Medical Center in Cebu City. She was identified as Marites Geñares, 43, from the town’s Barangay Calajoan.

The Sugat Kabanhawan, which is held every Easter Sunday, is the reenactment of the meeting of the Risen Christ and the Sorrowful Mother, which the town is famous for.

Supt. Dexter Calacar, Minglanilla police chief, said the victims rushed to the stage to take shelter from the rains.

The stage, made of steel frames, was built on the quadrangle of the Minglanilla Central School. The rain deposit on the tarpaulin became so heavy that it gave way at around 12:15 a.m.

Minglanilla Mayor Elanito Peña said the municipal government will pay for the the hospital bills of Geñares.

“We will also visit her and check on her state. The municipal government will also be giving the victim a financial assistance,” the mayor said.

Cebu Archbishop Jose Palma, sought for comment, said he was saddened by what happened in Minglanilla even as he praised leaders and residents for proceeding with a long-standing religious tradition.

At he same time, however, he said such an “unfortunate” incident would hopefully not happen again, adding it should be a reminder for the organizers to take the necessary precautions” to ensure the safety of all participants to the Sugat events.

In Cebu City, flood waters inundated 19 flood-prone barangays, including Mabolo, Kasambagan, Pardo, Basak, Inayawan and Tisa and forced over 50 families in Barangay Talamban and another 20 in Barangay Kinasang-an to evacuate at the height of the flooding.

Perimeter fences were also reported to have collapsed in Barangays Tisa and Pardo while mudslides were reported in at least three mountain barangays in Cebu City — Binaliw, Budlaan and Busay — according to Cebu City Disaster Risk Reduction and Management Office (CCDRRMO) head Nagiel Bañacia.

“The mudslides were recorded at around dawn. But these areas are already passable as we have already cleared these using our heavy equipment,” he said.

The city is also monitoring Barangay Sirao, where there are already tension cracks, in case there will be movement of the ground.

The city’s Department of Social Welfare and Services (DSWS) gave food packs to the evacuated families prior to their return to their homes past noon yesterday, he said.

Bañacia said the CCDRRMC raised a red flood alert at 10 p.m. on Saturday due to the nonstop heavy rains.

In Eastern Visayas, floods were also reported in Tacloban City and the towns of Palo and Tanauan in Leyte province on Saturday night.

Floods affected six villages of Palo and 15 in Tanauan, said Roel Montesa of PDRRMC-Leyte. But Montesa could not say how many families from these villages were affected. No evacuation was conducted.

Aguirre meanwhile said Cebu was expected to have a sunny weather by today as the LPA headed for the northern part of Panay Island and to Mindoro province before finally leaving the country on Tuesday.

Read Next
Death came as they were sleeping