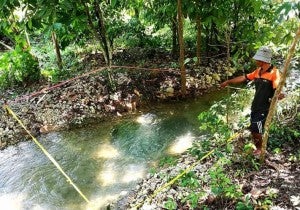 A huge sinkhole was spotted in the middle of a river in Badian town, prompting officials to cordon the area to prevent accidents while authorities are still trying to figure out how to go about the matter.
Source: Mark Andrew Celestrial Jorolan FB

RESIDENTS of a quiet village in Southern Cebu were surprised to see that a huge hole had formed in the middle of a river.

According to PO1 Rodjie Alicaway of the Badian Police Station, a concerned citizen alerted police about the presence of the sinkhole, which was two meters wide.

At 6:20 a.m. on Saturday, investigators immediately proceeded to the area and saw that right in the middle of the river was a huge cavity with a depth they had yet to determine.

“We tried to insert a 20-meter-long bamboo into the sinkhole and yet it failed to touch the bottom of the hole. It must be very deep,” said Alicaway in a phone interview with Cebu Daily News.

Police then reported the matter to Badian Mayor Carmencita Lumain for proper action.

The police have cordoned the area to prevent people and their animals from passing through that part of the river to avoid accidents.

“We’re afraid that there might be those who will fall into the hole,” Alicaway said.

Baltazar Tribunalo, head of the Cebu Provincial Disaster Risk Reduction and Management Council (PDRRMC), assured that measures had been undertaken to secure the area while authorities planned to seek the intervention of the Philippine Institute of Volcanology and Seismology (Phivolcs) and the Mines and Geosciences Bureau (MGB) in addressing the matter.

Badian Vice Mayor Fructuoso Caballero had also told Tribunalo that barriers had been placed around the sinkhole.

“When there are sinkholes, what we usually do is to access the area to find out whether or not there are structures that have been affected,” he told CDN.

Sinkholes are formed usually after heavy rains or an earthquake.

A sinkhole is a depression or hole in the ground caused by some form of collapse of the surface layer.

In 2015, at least four sinkholes were discovered in Badian town after Typhoon Seniang.

Read Next
ONE YEAR RECOVERY: ABU SAYYAF in bohol, the aftermath