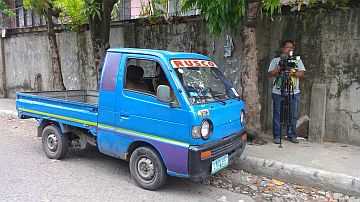 The vehicle which a business was killed by an unidentified assailant in E. Sabellano St., Barangay Pardo.
(CDN PHOTO)

An owner of an electrical shop was shot dead by two men on board a motorycle inside his multicab along E. Sabellano St. in Barangay Pardo, Cebu City past 7 a.m. on Tuesday.

Marcelino Escalante, 54, suffered gunshot wounds on his head and neck.

The suspects, who according to witnesses, wore full-faced helmets also took the victim’s sling bag which contained P10,000 cash.

His wife Marcelina was shocked when she learned about the shooting.

“Nakalitan mi sa nahitabo. Wala may nasuko ana niya.(We were surprised with what happened. We don’t know of anyone who is mad at him),” she said.

The couple has seven children.

The victim is a volunteer of the Crime Watch in Action, a group who helps authorities fight all forms of crime.

Read Next
The Superstore Cometh