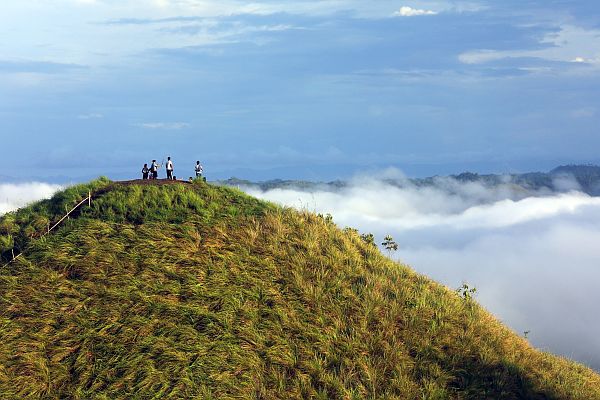 TOURISM IS BACK. After state forces eliminated all 11 Abu Sayyaf bandits who entered Bohol in April, tourists have returned to Bohol, like this group of visitors who went up this hill in Barangay Concepcion of Danao town to witness the “Sea of Clouds.” However, the alert status remains high in Bohol, Cebu and the rest of Central Visayas and Negros Island Region due to the sighting of armed men in Guihulngan City,
Negros Oriental.
CDN PHOTO/TONEE DESPOJO

The police in Central Visayas raised an alert status in the region in the wake of the sighting of a group of armed men in Guihulngan City in Negros Oriental, even as police and military authorities in Central Visayas and Negros Island Region(NIR) urged the public to stay calm but vigilant.

The Police Regional Office in Central Visayas (PRO-7) is now in close communication with the police in the NIR after almost two dozen armed men were sighted in Guihulgan City, according to Chief Supt. Noli Taliño.

Taliño, PRO-7 director, said the intelligence units of Central Visayas is coordinating with their counterpart in the NIR to validate the threat and ensure these armed men will not cross to Cebu.

Negros Oriental used to be part of Central Visayas (Region-7) while Negros Occidental belonged to Western Visayas (Region 6) until the two provinces on Negros Island were created as a separate region in 2015.

Taliño added they were also helping the police in NIR in validating the sightings of the armed men, whom he suspected were communist guerillas.

Taliño believed the armed men are New People’’Army (NPA) rebels and not members of terrorist groups like Abu Sayyaf.

(I cannot speak whether it’s really NPA or ASG since it’s in another region. But this is not ASG [Abu Sayyaf Group]. I don’t believe it’s Abu Sayyaf.)

Still, he said PRO-7 is studying all information related to the armed men who were reported to have landed on board pump boats in Barangay Basak of Guihulngan City on Wednesday morning.

The group was reported to have headed towards the hinterland villages of the city after asking direction from a resident who, in turn, immediately reported the incident to the city police.

Too close to Cebu

Taliño said they are closely monitoring the sighting since the southern part of mainland Cebu is just an hour away from Guihulngan City.

Taliño stressed the police in Central Visayas are also well trained in handling this kind of information because all police officers — from the provincial directors down to the last station-level chief — have been instructed since last year to keep monitoring their areas of responsibility for possible entry of bandit or rebel groups.

Taliño said they also learned a lot in terms of intelligence gathering and combat tactics after over a month of fighting the ASG in Bohol province alongside the military.

And with that experience, Taliño said he was confident that terrorist groups cannot easily enter Cebu.

(Especially with what happened in Bohol, we organize communities to work with the police down to the village and even sub-village levels. We told the other provinces — Cebu and Siquijor — to monitor their areas and they should report immediately any suspicious activities.)

Col. Medel Aguilar, Centcom assistant chief of the Unified Command staff for Civil Military Operations, asked the public not to panic about the sighting of armed men in Negros Oriental.

He said that the Armed Forces of the Philippines (AFP) and the Philippine National Police (PNP) are helping each other in securing the communities.

“Our people need not worry about the reported presence of armed men,” Aguilar said.

Even as the AFP is taking action to validate the information, Aguilar added they are thankful to residents who keep sharing information about the presence of suspicious persons and activities in their communities.

On Wednesday, within hours after the sighting of armed men in Guihulgan, the 2nd Negros Island Geographical Battalion was reactivated.

But Aguilar said it was just coincidence that when they reactivated the battalion, armed men were sighted in Guihulngan.

The battalion involved 600 personnel composed of elements from the military, members of the Citizen Armed Force Geographical Unit (Cafgu) and reservist who would be deployed in NIR to fight insurgency, said Aguilar.

“This is our strategy adjustment. We are maximizing our force multipliers,” Aguilar said.

Taliño, on the other hand, said that the travel advisory issued by the United Kindom (UK) last weekend was not related to the sightings of armed men in Guihulngan.

Last week, the British Embassy in Manila issued a travel advisory warning their citizens to avoid going to Southern Cebu, specifically in the towns of Badian and Oslob, due to alleged terror threats.

Guihulngan City is just across Cebu’s coastal towns of Dumanjug and Pinamungajan, both of which are about two hours away from Badian and Oslob.

(We don’t see any relation of Guihulngan to the travel advisory against southern Cebu.)

Taliño assured that southern Cebu is still being secured by the local tourist police and by Task Force Cebu, which is compose of military forces and personnel from the Philippine Coast Guard.

But the police will not take lightly the advisory issued by the United Kingdom, stressed Taliño.

He said that even if security measures are in place in southern Cebu, they will keep on checking and validating the basis for the travel advisory issued by the British Embassy.

The sighting of about 20 armed persons in Guihulngan, who are believed to be communist guerillas, came just five days after UK issued the travel advisory.

On the other hand, within two days after the American Embassy in Manila issued a travel alert over possible terror attacks in Cebu and Bohol last month, 11 ASG members arrived in Barangay Napo in Inabangga town of Bohol on April 10.

All of the ASG members who entered Bohol were killed in separate operations, the last two of whom were killed last Monday on Pangangan Island of Calape town.

He said he has also directed chiefs of police to immediately alert the CPPO about any information involving presence of armed men in their areas.

Noble said they particularly paying attention to the southern Cebu towns that are facing Negros Island, such as Asturias, Balamban, Dumanjug,

Moalboal and all other towns in between the cities of Toledo and Carcar.

Noble, in his recent meetings with chiefs of police in Cebu’s southern area, always emphasized their need to remain vigilant and never take for granted every information relayed to them by residents, no matter how trivial it may seemed.

Noble added they are on heightened alert status but still on normal duty situation, which means that days off or vacations of policemen have not been canceled./with correspondent

Read Next
LGUs prepare for looming transport strike on Monday